The Undesigned Brain is Hard to Copy 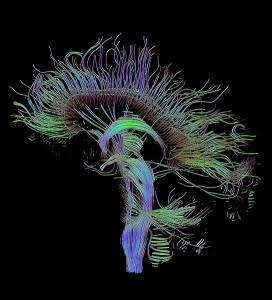 UPDATE: Hanson has responded and Lee has rebutted. My reaction after the jump.

The Singularity seems to be getting less and less near. One of the big goals of Singularity hopefuls is to be able to put a human mind onto (into? not sure on the proper preposition here) a non-biological substrate. Most of the debates have revolved around computer analogies. The brain is hardware, the mind is software. Therefore, to run the mind on different hardware, it just has to be "ported" or "emulated" the way a computer program might be. Timothy B. Lee (not the internet inventing one) counters Robin Hanson's claim that we will be able to upload a human mind onto a computer within the next couple decades by dissecting the computer=mind analogy:

You can’t emulate a natural system because natural systems don’t have designers, and therefore weren’t built to conform to any particular mathematical model. Modeling natural systems is much more difficult—indeed, so difficult that we use a different word, “simulation” to describe the process. Creating a simulation of a natural system inherently means means making judgment calls about which aspects of a physical system are the most important. And because there’s no underlying blueprint, these guesses are never perfect: it will always be necessary to leave out some details that affect the behavior of the overall system, which means that simulations are never more than approximately right. Weather simulations, for example, are never going to be able to predict precisely where each raindrop will fall, they only predict general large-scale trends, and only for a limited period of time. This is different than an emulator, which (if implemented well) can be expected to behave exactly like the system it is emulating, for as long as you care to run it.

In short: we know how software is written, we can see the code and rules that govern the system–not true for the mind, so we guess at the unknowns and test the guesses with simulations. Lee's post is very much worth the full read, so give it a perusal. Lee got me thinking with his point that "natural systems don't have designers." Evolutionary processes have resulted in the brain we have today, but there was no intention or design behind those process. Our minds are undesigned. I find that fascinating. In the first place, because it means that simulation will be exceedingly difficult. How do you reverse-engineer something with no engineer? Second, even if a simulation is successful, it by no means a guarantees that we can change the substrate of an existing mind. If the mind is an emergent property of the physical brain, then one can no more move a mind than one could move a hurricane from one system to another. The mind, it may turn out, is fundamentally and essentially related to the substrate in which it is embodied.UPDATE: Hanson's main claim is that we can make "economically-sufficient substitutes for human workers" at some point because "we already have pretty good signal-processing models of some cell types; we just need to do the same for all the other cell types." I acknowledge non-biological minds may be possible, but not within this century. The problem is two-fold. First, we don't understand the neurons in sensory organs well enough to replicate them, we just skip over broken ones with an entirely different system and let the brain figure the data out. The mind can "see" with almost any sufficiently nuanced set of information. As Lee notes, we can do that because we already know how to make an artificial ear, the problem was connecting it to a brain. Second, understanding the neuron does not mean we understand the network, nor how the network uses each neuron to process and retain information. Lee's protein example is designed to show this micro/macro incongruence. Finally, even if I grant Hanson's point that the mind was "designed," evolution is a messy and lazy inventor. As such, replication of biological structures is notoriously difficult. Perhaps unplanned is a better word? I'm eager to see how this debate progresses, but it seems to me that Hanson takes the computer analogy a bit to strongly.