The Trouble With The "Journal of Stem Cells"

A couple of weeks ago, I wrote about a paper describing possibly unethical stem cell injection treatments for children with autism. That paper was published in 2015 in the Journal of Stem Cells. I've since discovered additional problems with this journal. It's important to note at the outset that the Journal of Stem Cells is not some obscure operation. It's indexed in MEDLINE, something that the vast majority of 'predatory' journals could only dream of. MEDLINE is the gold standard, or at least, it usually is. 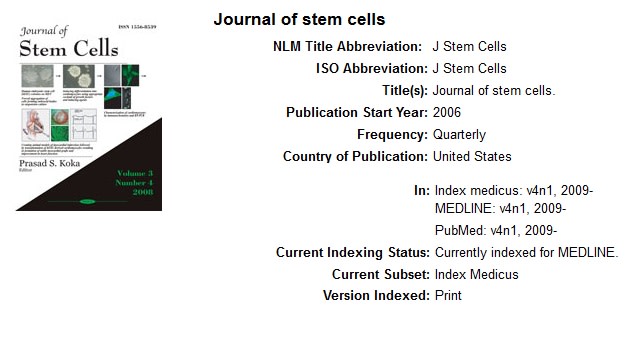 I have three main concerns about the Journal of Stem Cells:

I have discovered evidence of plagiarism in two papers in the Journal. What's more, Prasad S. Koka, the Editor-in-Chief of the Journal, is the corresponding author on both of these papers, raising questions about the quality of editorial oversight. The first paper (Koka et al. 2017) is a review on the topic of "Potential Origins of Cancer Stem Cells in the Disease Evolution and Etiology". Turnitin reports that 41% of the text is identical to previous sources. Some of the sources are cited, others are not. To give one example, here's a passage from Koka et al.

Cancer cells must be capable of continuous proliferation and self- renewal to retain the many mutations required for carcinogenesis and to sustain the growth of a tumor, since differentiated cells constrained by the Hayflick Limit and cannot divide indefinitely. The Hayflick limit (or Hayflick phenomenon) is the number of times (40-60) a normal human cell population will divide until cell division stops. This is because the telomeres associated with each cell’s DNA will get slightly shorter with each new cell division until they shorten to a critical length [15, 16]. In other words, a normal cell lacks a sustained division as opposed to the cancer cell.

This is similar to the Wikipedia page on "cancer stem cells":

Cancer cells must be capable of continuous proliferation and self-renewal to retain the many mutations required for carcinogenesis and to sustain the growth of a tumor, since differentiated cells (constrained by the Hayflick Limit) cannot divide indefinitely.

Which links to the page for "hayflick limit":

The Hayflick limit or Hayflick phenomenon is the number of times a normal human cell population will divide until cell division stops. Empirical evidence shows that the telomeres associated with each cell's DNA will get slightly shorter with each new cell division until they shorten to a critical length.

Koka et al. don't cite either of these Wikipedia pages. The second instance of plagiarism I found is Das et al. (2013) "Adult Mesenchymal Stem Cells and Their Potency in the Cell Based Therapy". Turnitin finds 47% overlap here, and some sections are a veritable rainbow of different sources: 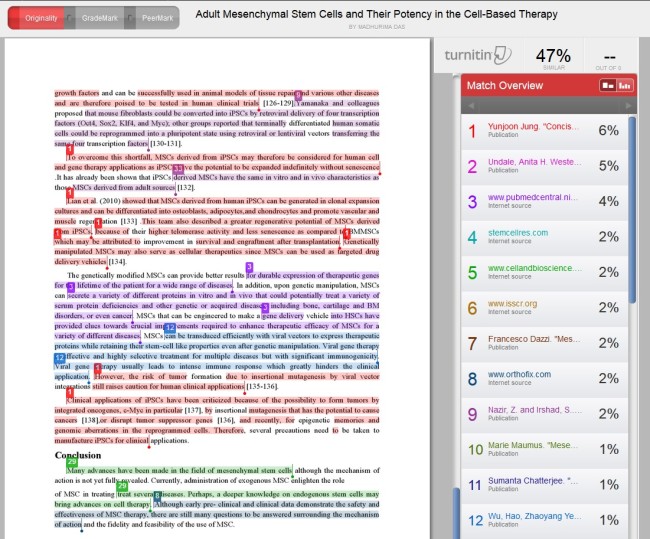 Bear in mind that this isn't a case of authors recycling their own text. As far as I can see, none of the the source material shares any authors with the Das et al. paper. This is outright plagiarism, in a MEDLINE-listed journal, brought to you by the editor-in-chief as corresponding author. 2. Editorial Conflicts of Interest? As well as being editor-in-chief at the Journal, Prasad S. Koka is Scientific Director at DiponEd BioIntelligence LLC. DiponEd describes itself as providing products and solutions that prominently include stem cell technologies, such as "Adult Stem Cells - Autologus and Allogenic Transplantations in diseases/ disorders / trauma" amongst others. It would seem that Koka has a conflict of interest here. His editorial decisions could have financial implications for him. For instance, accepting a paper showing that a stem cell treatment is effective could boost the market for DiponEd's products. The same conflict is at play when Koka writes a paper of his own. Koka doesn't acknowledge this problem in his papers in the Journal. In fact, there is no "Conflict of Interest" (CoI) section in any Journal papers to my knowledge. As I noted last time, this is unusual. Almost all journals today require CoI reporting to promote transparency in science. Interestingly, the CEO and Managing Director of DiponEd BioIntelligence is a Dr Kaushik Deb. Ten years ago, a University of Missouri-Columbia post-doc called Dr Kaushik Deb was suspected of faking data in a Science paper on stem cells. The paper was retracted. Deb vanished during the University of Missouri-Columbia investigation, but he was found guity of fabrication and falsification by the Office of Research Integrity (ORI) in 2014. Is this the same Kaushik Deb who now manages DiponEd and is, presumably, Koka's boss? Deb is certainly a regular at Koka's Journal, having published 9 papers there, 4 of them with Koka as a coauthor. Thanks to commenter 'Liberate Science' for drawing my attention to this. 3. Uncertain Ethics In my previous post I discussed a 2015 Journal paper that stuck me as quite possibly unethical. I also noted that the paper didn't state which ethical review committee had approved the study. I did a quick survey of the five most recent papers (that I was able to access) reporting studies on human participants published in the Journal: 1, 2, 3, 4, 5. Of these, two contained no reference to ethics approval at all. The other three papers said that "the study had ethical approval" or words to that effect but none of them named the specific ethics committee that reviewed the study, making the claims difficult to verify. Funding and CoI statements were absent from all five.