The Things That Kill Us

As my first act of 2014, I wrote a piece for the New York Times Sunday Review: Why Everyone Seems to Have Cancer. The occasion was the annual release of the National Cancer Institute's "Report to the Nation." It showed, as it has for many years, that mortality from cancer continues to decline. But the progress is far outpaced by what has been happening with the country's other biggest killer. In the last half century, the death rate from heart disease has dropped by 68 percent and cancer by 10 percent. In my article I consider the reasons, but the short answer is this: heart disease is an easier problem and death is a zero-sum game. Fewer people dying of one means more people living long enough to succumb to the other. All of this must be accounted for in age-adjusted numbers. The post-World War II baby boom led to a surge in the population -- a demographic bulge of people who are now in their 60s, when cancer is more likely to occur. The fact that we are left to die from it -- instead of, say, tuberculosis or influenza -- is a kind of luxury. It is not one enjoyed in the developing world, where cancer is overshadowed by more immediate perils. This point is illustrated by a stunning interactive website operated by the Institute for Health Metrics and Evaluation at the University of Washington (started in 2007 with money from the Bill & Melinda Gates Foundation). One can spend hours entering parameters and watching how the rankings change. It is one of the most interesting and instructive stops on the Web. First choose Switzerland, which is always near the top of countries with the longest life expectancy: 83. The leading causes of death are similar to those in the United States: ischemic heart disease, stroke, and lung cancer. They are followed by chronic obstructive pulmonary disease, which is also related to smoking. Then comes pneumonia (often acquired by the elderly during long hospitalizations), colorectal cancer, accidental falls, Alzheimer's, diabetes, and suicide. 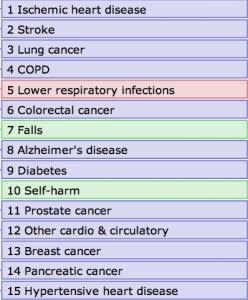 Leading causes of death in Switzerland Among the top 25 causes of death in the country, there are 10 other cancers: prostate, breast, pancreatic, stomach, liver, kidney, bladder, and ovarian along with leukemia and non-Hodgkin’s lymphoma. For a very different picture click the pulldown menu again and choose the Central African Republic. The fatal diseases, color-coded according to type, shift around like entries on a busy railroad station information board. In this country, average life expectancy, at 48, is almost dead last in the world. Here people are most likely to die of AIDS, diarrhea, malaria, pneumonia, and malnutrition. Heart disease is way down at no. 8. 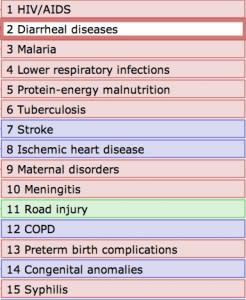 Leading causes of death in the Central African Republic Cancer doesn’t make an appearance until position 36. That is for cancer of the liver, one of the few that can be caused by infection (hepatitis virus). Prostate cancer, an old man’s disease (median age of death in the United States is 80) is No. 59. You can go through this exercise, country by country, or instantly combine the numbers for regions, continents, or the world. Choose developing countries as a whole and you can see how, in the last 10 years, deaths from many infectious diseases like measles, meningitis, and syphilis have fallen, while heart disease and cancer are ascending. Also on the rise is death by automobile. Stomach cancer, which is associated with chronic Helicobacter pylori infection, has fallen, perhaps because of improvements in sanitation. But cancers associated with viruses -- liver and cervical -- have been rising. The same is true for lung cancer, which has escalated along with the tobacco companies’ business plan of preying on less educated people. And sneaking up from behind are the cancers of the affluent -- breast and colon. Scientists don’t really know their cause. They have been vaguely associated with the Western lifestyle -- some murky combination of diet, obesity, diabetes, and lack of exercise. But they also come from not dying, young and sometimes violently, of other things. Comments and corrections are welcome by email. For public discussion please use Twitter. For a glimpse of my new book, The Cancer Chronicles, please see this website. @byGeorgeJohnson