The Strange Rise and Fall of a Medical Journal

For almost a year, I'vebeenbloggingabouttwo strange organizations from the world of science, Publication Integrity and Ethics (PIE) and Open Access Publishing London (OAPL). This story went quiet for a while, but now it's back, with the publication of an extraordinary document called: Evidence-based analysis: The rise and fall of Head and Neck Oncology I : the audit and subsequent investigations. This paper is, to my knowledge, unique in the medical literature. In it, the editor of a medical journal devotes a whole 15 pages to defending his own behavior as editor, and refuting charges of misconduct against him. That editor is Dr Waseem Jerjes and the journal is Head and Neck Oncology (HNO), which publishes research on head and neck cancers.

The story of HNO - as Jerjes tells it - is quite spicy. Back in July 2012, HNO was an open-access journal published by BioMed Central (BMC). On 4th July 2012, however, BMC suddenly announced that they'd performed an internal audit and had found evidence of 'serious editorial misconduct' at HNO - with Jerjes being, allegedly, the main culprit. Two days later, the publisher asked Jerjes and all three of the other editors-in-chief to step down. Shortly afterwards, BMC stopped publishing HNO - although their archive remains. Why was HNO shut down? Jerjes himself has published BMC's allegations as an appendix to his paper. Amongst other charges, the main claim is that Jerjes was accepting papers on his editorial judgement alone, without sending them out for peer review (except that provided by himself). BMC also allege that Jerjes frequently submitted his own work to HNO, and that in many cases, such articles were

apparently handled by Waseem Jerjes, an author of the article and Editor-in-Chief of the journal at that time. The manuscript was reviewed by one recent co-author of some of the authors and accepted without revision.

I'll consider Jerjes' response to these claims in a later post. First, we'll look at the remarkable way in which HNO came back from the grave. Jerjes says that after BMC axed HNO,

the journal moved to another publisher with its editorial board intact, releasing its first new issue on the 9th September, 2012.

HNO's publisher is now OAPL, as we've seen. What Jerjes never mentions, however, is that Open Access Publishing London (UK) Ltd. is a company directed by a Mr Walid Khalid Wadee Jerjes - in other words, by Waseem Jerjes's relative. A strange coincidence? Stranger still, there is another company called Open Access Publishing London Ltd - with no "(UK)". This company shares the same address (well, on paper - when I checked last year, the building appeared vacant) as "OAPL (UK)". Why two such companies with such similar names were created is a mystery. And it turns out that there was yet another publishing company created by a Jerjes family member. This was "UC Publishing London", later renamed "You See Publishing London" and later dissolved. This was incorporated on August 14th 2012. The director? A Mr Walid Khalid Wadie Jerjes. Whether this is the same person as Mr WK Wadee Jerjes, I'm not sure. UC Publishing is a curious name. What does it mean? This is just a guess, but it could be that the "UC" was intended to suggest University College London (UCL) - which was the institution where Jerjes and two other key editors of HNO were linked to in 2012. I further guess that "UC" was changed to the rather odd "You See" when someone realized that UCL might not take kindly to this kind of branding. So in summary, after BMC dropped Head and Neck Oncology, the journal continued to be published by a series of three newly founded publishing companies, directed by relatives of the very editor (Waseem Jerjes) whose alleged misconduct was the reason for HNO's being dropped in the first place! Some might consider this a conflict of interest: a publisher is supposed to act as a final arbiter of ethics and quality for a scholarly journal (which is just what BMC did when they dropped HNO). If the publisher is a relative of the journal's editor, this independent role is lost. So it would be understandable if Waseem Jerjes weren't keen to advertise his family connections with OA Publishing London. In the new article, the Conflicts of Interest section does note that Jerjes has "2 relatives practicing within the fields of online publishing, training and education" but that's it: there is no mention that the publisher is OAPL! These facts aredisclosed here on the PIE site, but that's a separate website - and I believe that they were only posted there after I first exposed the links on this blog. A Jerjes family member being the director of OAPL is remarkable. But a directorship is often a ceremonial role. Who actually staffs the publisher? Their "The Team" page doesn't say: it lists job titles, and contact details, but no names. (There are named Trustees and In-House Editors.) Is it possible that Waseem Jerjes himself runs OA Publishing London? That's pure speculation. It would be even more remarkable than the fact that his relative directs it. There is no direct evidence of this. But it might be relevant here that OAPL's Twitter account has recently been posting exactly the same tweets as Waseem Jerjes' personal account has - and at the same times. Sometimes Jerjes posts a few minutes earlier (e.g. Jerjes, OAPL), sometimes a few minutes later (OAPL, Jerjes)... hmm. 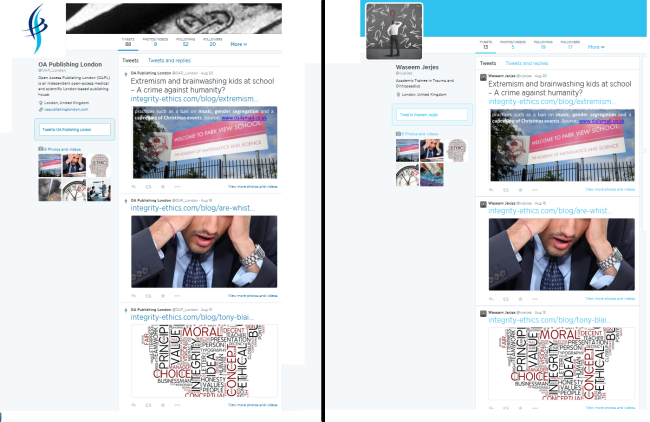 Whether or not OAPL was founded as a means to keep HNO alive, it quickly expanded beyond that remit, and now publishes over 50 open access journals. Authors can be charged up to £750 to publish in an OAPL journal. I believe that anyone considering doing so ought to think carefully before entrusting their money, and their manuscript, to an organization with a history of this nature. There are many quality open access publishers. Postscript: Jerjes' paper also mentions me! I feature in the part of the paper about Publication Integrity and Ethics (director: Waseem Jerjes), which I blogged about last year.

An anonymous blogger called Neuroskeptic (appears to be either American-based or UK-based, but introduces himself as a UK national who claims to have multiple occupations including as a psychiatrist, psychologist, neuroscientist and a news reporter) made allegations that the new ethics organization [i.e. PIE] ... had plagiarized from COPE and other entities. This blogger has used the website of a US-based magazine under the title of "The Strange Case of Publication Integrity and Ethics" and the blog of Jonathan Eisen [it's great] as a platform for his attacks.

For the record: I am UK-based and a UK national. Neither of these is a secret. I have never claimed to be a news reporter or a psychiatrist. As 'psychiatrist' is a medical title, and I am not medically qualified, to say that I have claimed to be a psychiatrist is to accuse me of impersonating a doctor. I never used the word "plagiarism" in reference to PIE, but I did suggest that some of their materials contained similarities to certain earlier documents which PIE did not cite. PIE later added acknowledgements to many of the 'entities' that I had identified, which I take as evidence that I was right.

Planet EarthAmerica's Oldest City Is Not Where You'd Expect