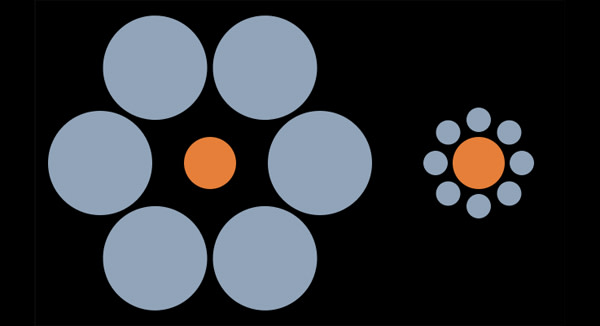 Look at the image above. Which of the central orange circles looks bigger? Most people would say the one on the right – the one surrounded by the smaller ‘petals’. In truth, the central circles are exactly the same size. This is the Ebbinghaus illusion, named after the German psychologist Hermann Ebbinghaus. It has been around for over a century, but it still continues to expand our understanding of the brain. Samuel Schwarzkopf from University College London has just discovered that the size of one particular part of the brain, known as primary visual cortex or V1, predicts how likely we are to fall for the illusion. V1 sits at the very back of our brains and processes the visual information that we get from our eyes. It’s extremely variable; one person’s V1 might have three times the surface area of another person’s. While many scientific studies try to average out those differences, Schwarzkopf wanted to explore them. He recruited 30 volunteers and tested their reactions to two famous illusions, starting with Ebbinghaus’s circles. He altered the size of the two ‘flowers’ to the point where each volunteer thought that the central circles were the same size. 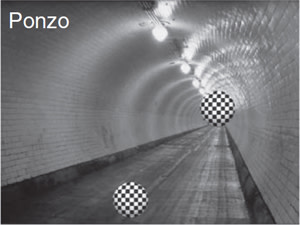 The second trick – the Ponzo illusion – relies on our sense of perspective. It works because we know that further objects look smaller. By placing two identical circles on an image of a three-dimensional scene (like the subway platform on the right), you can make the more ‘distant’ circle look larger than the ‘closer’ one. Again, Schwarzkopf altered the size of the two circles to the point where they seemed the same size. When Schwarzkopf scanned the volunteers’ brains and measured the size of their V1, he found that the smaller the area, the stronger the effect of the two illusions. It seems that the more neurons are devoted to handling visual information, the more accurate one’s perception of the world becomes. These results are the first to show that a purely physical aspect of the brain – the surface area of V1 – can predict the nature of a subjective conscious experience. That raises several interesting questions. For a start, some cultures like the Himba people of Namibia are less vulnerable to the Ebbinghaus illusion than English people are. Autistic people and very young children are similarly resistant. Could this reflect differences in the physical organisation of their brain? Only more research will tell. For the moment, the results remind us that none of us perceives the world around us in quite the same way. Two people can look at the exact same image and see different things. Just as our thoughts and emotions differ from person to person, so do our senses. Reference: Nature Neuroscience http://dx.doi.org/10.1038/nn.2706More on perception: