The Political Psychology of a Government Shutdown 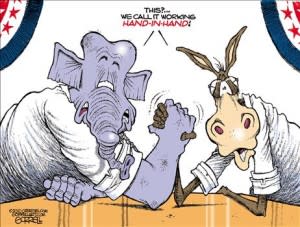 Some while back, Jonathan Chait had a thought provoking, if brief blog post at The New Republic entitled “Why Liberals Like Compromise and Conservatives Hate It.” The piece was about the possibility (then more distant) of a government shutdown, and reasoned that one was likely in part because conservatives and liberals differ in style and outlook:

Even aside from the underlying desire by the GOP for large spending cuts, Republican voters are less attracted to compromise as a matter of general principle....Liberalism is an ideology that values considering every question through the side of the other fellow and not just through your own perspective…The stereotype of liberalism, which is sometimes true, often runs toward bending over so far backward that you can't make obvious moral judgments: Who are we to judge this or that dictator? Criminals are just the result of bad environment. In any case, the joke about liberals -- a liberal is somebody who won't even take his own side in an argument -- is not a joke you'd hear about conservatives. Now, I think the qualities of confident assertion of principle and willingness to bend both have their place. One of my meta-beliefs about, well, everything is that one needs to be able to understand both black-and-white situations and shades-of-gray situations. In any case, I think conservatives tend to err toward the black-and-white worldview, and liberals toward the shades-of-gray worldview.

Chait may be on to something, more than he even (apparently) knows. After all, his basic schematic for the differences between liberals and conservatives does not merely spring from his own opinion or intuition—it reflects a literature in psychology. For instance, consider research by John Jost of New York University and his colleagues, as helpfully summarized by Psychology Today:

The most comprehensive review of personality and political orientation to date is a 2003 meta-analysis of 88 prior studies involving 22,000 participants. The researchers—John Jost of NYU, Arie Kruglanski of the University of Maryland, and Jack Glaser and Frank Sulloway of Berkeley—found that conservatives have a greater desire to reach a decision quickly and stick to it, and are higher on conscientiousness, which includes neatness, orderliness, duty, and rule-following. Liberals are higher on openness, which includes intellectual curiosity, excitement-seeking, novelty, creativity for its own sake, and a craving for stimulation like travel, color, art, music, and literature. The study's authors also concluded that conservatives have less tolerance for ambiguity, a trait they say is exemplified when George Bush says things like, "Look, my job isn't to try to nuance. My job is to tell people what I think," and "I'm the decider." Those who think the world is highly dangerous and those with the greatest fear of death are the most likely to be conservative. Liberals, on the other hand, are "more likely to see gray areas and reconcile seemingly conflicting information," says Jost. As a result, liberals like John Kerry, who see many sides to every issue, are portrayed as flip-floppers. "Whatever the cause, Bush and Kerry exemplify the cognitive styles we see in the research," says Jack Glaser, one of the study's authors, "Bush in appearing more rigid in his thinking and intolerant of uncertainty and ambiguity, and Kerry in appearing more open to ambiguity and to considering alternative positions."

As Chait hints, there are times for black and white, and times for shades of gray. If conservatives do tend to prefer the former and liberals the latter, this is no moral judgement of either of them. Rather, it's an observation about styles and tendencies--both of which have benefits, both of which can lead us astray. However, it is also the case that unresolvable conflict between the two styles and mindsets--which often occurs--can lead to results that benefit nobody (except, in the case of a shutdown, perhaps President Obama's reelection chances). So I wish both sides were thinking along these lines in their final negotiations.