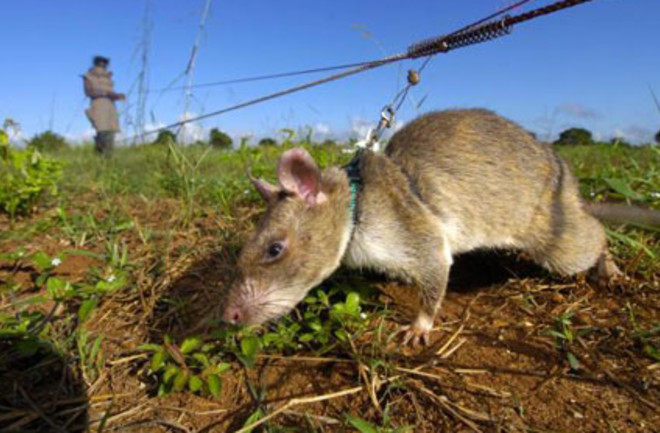 Struggling for a gift idea? How about gifting a rat through "Adopt-a-HeroRat." These are no regular New York City-type rats, creepily scampering across train tracks or spreading disease; these so-called HeroRats help save lives by sniffing out unexploded landmines in Mozambique. For just six dollars a month, you can choose to support the good work of "Allan," "Kim," "Tyson," or "The Chosen One." The rats being used in Mozambique's mine-sweeping operations are African pouched rats; they're small, lightweight (weighing about 3 pounds), and, according to the BBC, surprisingly cute. Traditionally, mine-detection has been carried out by metal detectors and sniffer-dogs, but the rats are the latest workers to join the team. However, the mine-removal process is still dangerous and labor-intensive: Once a rat discovers a mine it has to be dismantled by a human. A bunch of these rats have been trained by APOPO, a joint Belgian/Tanzanian organization that taught the rodents to associate the smell of TNT in unexploded explosives with food. So, much like the dogs that Igor Pavlov taught to associate a certain stimuli with a particular response, the rats associate mines with delicious snacks, and are highly motivated to find them. APOPO's rats aren't deployed in the field without proper training, of course. First, they must attend a grueling boot camp in Tanzania, where, much like sniffer dogs, they work with individual human trainers. Each rat works in a training box and is fastened to a search line, which is strung between its two trainers. The rat sniffs up and down the box, moving through different lanes, systematically. When it smells an explosive, it starts scratching the top soil. The trainer clicks a clicker, the rat steps aside and gets his reward--a piece of banana. APOPO trainers say they're proud that the HeroRats are helping to find and eliminate the three million unexploded mines that still clutter Mozambique in the aftermath of a deadly civil war. But the HeroRats' life is not all sniffing and bananas, they have had their share of criticism too. British Army vet Andy Smith, who works with de-mining groups worldwide, told the online magazine Miller-McCune that while mine-detecting rats are "media-sexy" and attract a lot of money, they're highly inefficient:

Their legs are too small to walk regular patterns in overgrown fields, so vegetation must be trimmed, and the rats attached to a string to literally keep them in line. “You need to spend so much time clearing space, you’re better off doing it manually," Smith says.

But maybe mine detecting personnel who are working through the painstaking process of defusing deadly landmines across 70 countries need all the help they can get. And maybe "The Chosen One" can, in some small way, contribute to this effort. Related Content: Discoblog: Could Rats Be the Next Sniffing Dogs? Discoblog: Fanged Frogs, Giant Woolly Rats Found In Papua New Guinea DISCOVER: The Ancient Rat As Big As A BullImage: HeroRat.org