A peek inside the Harvard brain bank, where thousands of specimens await scientific study. 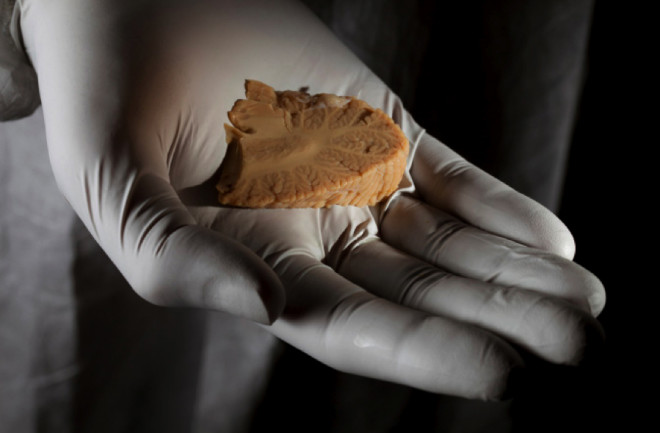 Louis Fernandes, Senior dissectionist at the brain bank, holds a block from a cerebellum, the part of the brain that coordinates motion and balance. The donor had diffuse Lewy body disease, a neurodegenerative condition that produces symptoms similar to those of Alzheimer’s and Parkinson’s. People with this disease may have normal-looking brain scans, but under a microscope, the front and side lobes of the organ are pockmarked with protein deposits. Fresh brains have a pinkish color; this one has been preserved in formalin. | Robert Clark

In a utilitarian room at Mclean Hospital in Belmont, Massachusetts, more than 3,300 identical Tupperware containers are stacked on long metal shelves. Inside each is a human brain—or, more accurately, what’s left of one. Here at the Harvard Brain Tissue Resource Center, donated specimens are sliced up, preserved, stored, and eventually parceled out to neuroscientists worldwide who study them for clues to disease, cognition, and the mysterious cellular underpinnings of psychology. New donations arrive almost every day, but keeping up with demand poses a constant challenge.

The Harvard facility is called a brain bank, but it is really more like a clearinghouse. Since its founding in 1978, the bank has processed more than 8,100 brains from people who agreed to donate that most precious organ to science. Each anatomical gift is gradually used up in order to accommodate the frequent requests from researchers. The bank provides several thousand blocks of tissue to between 50 and 100 investigators each year. Finally, when just a few slivers of a brain are left, the fragments are cremated.

As ghoulish as it may seem, studying dead brains is just as crucial as studying living ones, which is usually done through brain scanning techniques such as functional magnetic resonance imaging. According to brain bank director Francine Benes, a neuroscientist and psychiatrist, many fundamental questions in neuroscience can be answered only by partnering newer techniques with old-style dissection. Together, such analyses can address how brains are organized, what happens to neurons during psychiatric disease, and how different cells in different parts of the brain work together. Thanks to the Harvard brain bank, the answers—chilled and well-preserved—await those who seek them.

A stored brain from a person with restless legs syndrome, a poorly understood neurological disease. The brain is stored at –70 to –80 degrees Celsius (about –100 degrees Fahrenheit) in one of the 24 freezers at the bank. Freezing a brain preserves a snapshot of gene expression, protein activity, and other biological chemistry taking place at the time of death. One common problem: The freezing process can generate ice crystals that damage the microstructure of the tissue and make it more difficult to study. | Robert Clark

George Tejada, assistant director for tissue processing, pours liquid nitrogen into a Styrofoam container used to freeze brains. As soon as possible after the donor’s death—ideally, within a few hours—a specialist will remove the brain, wrap it in plastic, pack it in ice, and express-ship it to McLean. No matter the hour, Tejada or one of the other neuroanatomical technicians will rush to the lab to meet the delivery.

The best science is done on the most freshly preserved brains, so they work quickly, finishing the processing in as little as half an hour.

Technicians give each specimen a unique code to preserve the donor’s anonymity. After that, they photograph the brain and slice it in two; usually, one half is preserved in formalin and the other is sliced into 14 to 16 parallel sections and frozen.

Louis Fernandes, Senior dissectionist at the brain bank, holds a block from a cerebellum, the part of the brain that coordinates motion and balance. The donor had diffuse Lewy body disease, a neurodegenerative condition that produces symptoms similar to those of Alzheimer’s and Parkinson’s. People with this disease may have normal-looking brain scans, but under a microscope, the front and side lobes of the organ are pockmarked with protein deposits. Fresh brains have a pinkish color; this one has been preserved in formalin. | Robert Clark
Robert Clark

The postmortem brain can be shrunken in some neurodegenerative diseases, such as Alzheimer’s. But in many diseases, the brain looks unremarkable at first glance. These two deep-frozen slabs appear basically normal at this scale, even though the donor had Parkinson’s disease. The same is often true of the brains of people with psychiatric diseases. “You can have a relatively intact brain that becomes entirely dysfunctional,” Francine Benes says. She posits that some mental illnesses may be the result of neural circuit malfunctions in which nerve cells remain alive, but their signals do not travel where and when they should. The implication is that doctors might be able to restore a circuit to function, thereby reversing these nondegenerative illnesses.

In her research of schizophrenia, Benes has shown that the connections between two brain regions and the basolateral amygdala, an area involved in emotional reactions linked to learning and memory, probably play a role in how the disease develops. Identifying such a circuit and understanding how brain cells in it interact with one another might lead to new treatments. To crack complex problems like mental illness, researchers will need to use all the methods at their disposal, including gene expression analysis, neuro­imaging, and postmortem study. “The field needs to get rational and realize that information from many different approaches will have to be interconnected,” Benes says.