The master of illusions 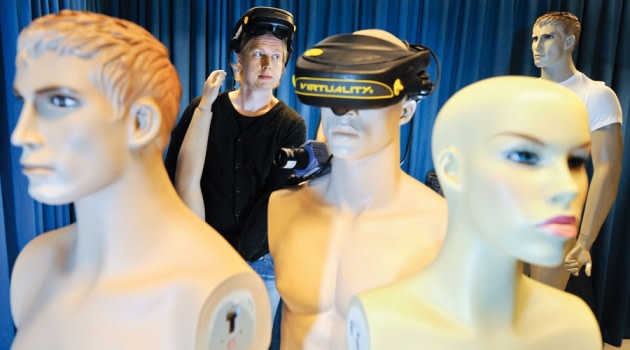 A few months ago, I went to Sweden, had an out-of-body experience and got stabbed with a knife. Sort of. The freelance life is really working out...I was there to meet Henrik Ehrsson, a neuroscientist who specialises in illusions that distort people's sense of self. I've written about his work before on this blog. He can convince you that you've swapped bodies with a mannequin, grown a third arm, left your body or shrunk to doll-size - all of which tells us some really interesting things about how the brain works. My feature about Ehrsson has just come out in Nature. I'm very proud of it, so do check it out. It also comes with a podcast interview with me, and a slideshow of pics that I took on the trip. Here's the opener:

It is not every day that you are separated from your body and then stabbed in the chest with a kitchen knife.But such experiences are routine in the lab of Henrik Ehrsson, a neuroscientist at the Karolinska Institute in Stockholm, who uses illusions to probe, stretch and displace people's sense of self. Today, using little more than a video camera, goggles and two sticks, he has convinced me that I am floating a few metres behind my own body. As I see a knife plunging towards my virtual chest, I flinch. Two electrodes on my fingers record the sweat that automatically erupts on my skin, and a nearby laptop plots my spiking fear on a graph. Out-of-body experiences are just part of Ehrsson's repertoire. He has convinced people that they have swapped bodies with another person, gained a third arm, shrunk to the size of a doll or grown to giant proportions. The storeroom in his lab is stuffed with mannequins of various sizes, disembodied dolls' heads, fake hands, cameras, knives and hammers. It looks like a serial killer's basement. “The other neuroscientists think we're a little crazy,” Ehrsson admits. But Ehrsson's unorthodox apparatus amount to more than cheap trickery. They are part of his quest to understand how people come to experience a sense of self, located within their own bodies. The feeling of body ownership is so ingrained that few people ever think about it — and those scientists and philosophers who do have assumed that it was unassailable.

Finally, many thanks to my editor Helen Pearson, who really helped to knock the piece into shape.

(Image by N. Larsson/AP for Nature)