The Man Who Mistook a Rubber Hand for His Own 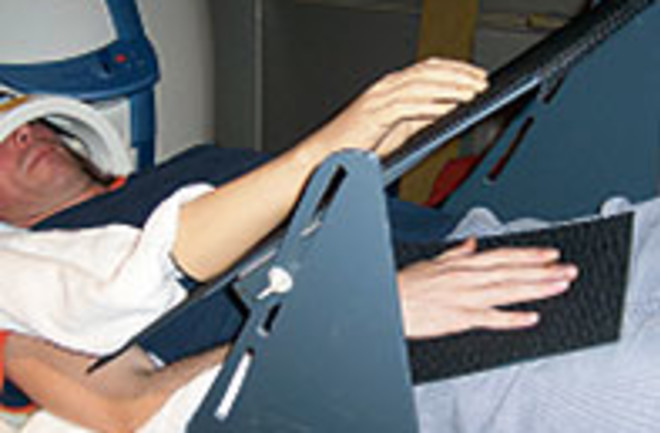 You can feel with your eyes and see with your hands, two new studies show. Researchers are finding evidence that our senses blend and reinforce each other in surprising ways.

One study analyzes the rubber-hand illusion, an old parlor trick. A subject sees a rubber hand plausibly positioned to extend from her arm while her real hand is hidden. If the fake and real hands are stroked simultaneously, she may feel the stroking in the location of the rubber hand, not the real one. Henrik Ehrsson of University College London and colleagues performed the trick on a group of subjects and scanned their brains. He found that the premotor cortex—a brain region that integrates vision and touch—lights up, signaling the source of the illusion. “It seems the premotor cortex matches the look of the hand and the feel of the hand,” he says. Because the brain relies more on vision than on tactile sensations, he concludes, it gives precedence to input from the eyes and makes the rubber hand seem real.

Neurologist V. S. Ramachandran of the University of California at San Diego and his student Shai Azoulai encountered an even stranger type of sensory cross-connection: A man who went blind reports that he can still “see” his hand when he passes it across what would be his peripheral vision. In this case, the reciprocity between vision and touch apparently works in reverse, allowing sensations from the arm to create the illusion of sight. Ramachandran takes this reciprocity as evidence that each neuron in the brain can perform more than one function, contrary to traditional notions that these cells have single, unchanging roles. “There is a tremendous amount of back and forth interaction between the senses,” he says. “We need to replace the static view of the brain.”