The Man Who Knew Moses But Not His Own Son

"Nissim", a 64 year old man, knows that the word for the eldest son in a family is the "firstborn", but he says that snow is pink and that we wear coats on our feet. A stroke left him unable to talk about anything except abstract concepts. The case of Nissim is reported in a fascinating new paper from Israeli psychologists Gvion and Friedmann: A selective deficit in imageable concepts. The patient had no known psychiatric or neurological problems, until he suffered a stroke affecting his left occipital lobe. This left him with various symptoms including aphasia, a deficit in producing meaningful speech. Aphasias are common after strokes - but Nissim's was remarkable because:

In spontaneous speech, he could discuss complex issues using abstract words, but failed to retrieve even very frequent imageable words. For example, we heard him hold a detailed conversation about the social risks of unemployment, where he could develop profound ideas using abstract words. Yet he failed to convey even the simplest information regarding what he ate for breakfast, or retrieve the names of his wife and children. When he described to us his failure to convey messages and to name objects or pictures, he said “I have become a person that has no answers. I don't have my words.”[The patient speaks Hebrew, these are the English translations.]

In neuropsychological testing, Nissim was badly impaired at naming objects and providing descriptions to match their names. His answers often involved abstract words. Given a ball, he made gestures of throwing and catching it, but all he could say was: "Something accurate, swift, accurate... Something accurate that can serve him". His appropriate gestures show that he understood what a ball is, but couldn't find the words to express it - except abstract ones. Based on descriptions of their lives, he correctly named 10 out of 14 famous figures who are not typically associated with a mental image, such as the prophet Moses and Isaac. But he only got 6/17 correct in the case of people whose names and faces are well-known, such as Israeli politicians, and his own son. The "imagability effect" is a well-known phenomenon - but in the other direction. Imagable words are generally easier to remember and, after brain damage, the ability to use imagable words is usually more resistant to loss. 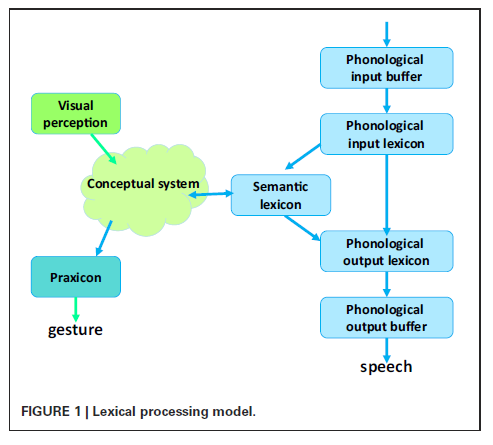 Gvion and Friedmann suggest that Nissim's stroke had damaged his ability to associate visual imagery with his stored mental representations of things (conceptual system). He was able to verbalize concepts that did not contain much visual imagery, because in such cases, presumably, there were other non-visual properties that sufficed to define them, and make connections with words. The authors provide a (not especially helpful) diagram. I'm not sure if this is really an explanation or a redescription of the case. It's a most interesting case, however. And it makes you think: do we rely on visual imagery when it's available? When we know what something looks like, does that visualization let us 'get away with' not knowing more abstract facts about it? Might seeing someone's face make it harder to know or think about them in certain ways? In many religions, there is a belief that to visualize is to make less sacred. The authors note that in orthodox Judaism, religious figures are not pictured, which is why Nissim was able to name Moses.