The magical power of "genes"

People sometimes seem to think that you could forestall a Gattaca-esque scenario of genetic transparency through privacy laws. But it seems to me that you’d actually need to go stronger, and not only guarantee the right to not have your genetic information disclosed. To prevent the emergence of a near-universal disclosure equilibrium in a world of cheap genetic profiling over the long run, you’d need to ban voluntary disclosure. The mere fact that you don’t want a potential partner to know your DRD4 profile will tell her all she needs to know about you. 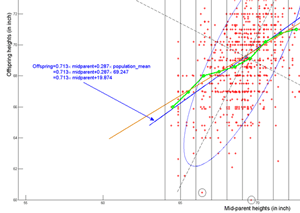 Let's grant the power of genomics to predict behavior in this way. Let's also neglect the real problems of banning this sort of thing in a world of commoditized sequencing or typing.* I have some news for Matt & company, there's already a much more powerful way to behavior genetic profile someone: look at their family. Indians have long known this. So the big short-medium term problem is that getting your hands on the biodata of anyone's family members is one-click away.... Update: A commenter points out that Yglesias may have been advocating such a position to expose the absurdity of it. I wondered that too, but wasn't sure and thought perhaps he was serious. In any case, I think the commenter makes good points, so I retract the charge. Though the bigger point obviously still stands. * Unless Matt has Victorian values I assume he could anticipate that it wouldn't be too hard to get "DNA" from a prospective partner. How exactly a ban would work when there are places overseas doing sequencing I have no idea. It isn't as if biological material is never sent through the mail.