How has neuroscience changed over the past decade? In a new paper, Hong Kong researchers Andy Wai Kan Yeung and colleagues take a look at brain science using the tools of citation analysis. Yeung et al. extracted data from 2006-2015 from Web of Science and Journal Citation Reports (JCR), which track publications and citations. All journals that the JCR classifies in the "Neurosciences" category were included. The first change Yeung et al. noticed was that the number of published neuroscience papers has been growing steadily, although keep in mind that the increasing volume of papers is a phenomenon not limited to neuroscience. 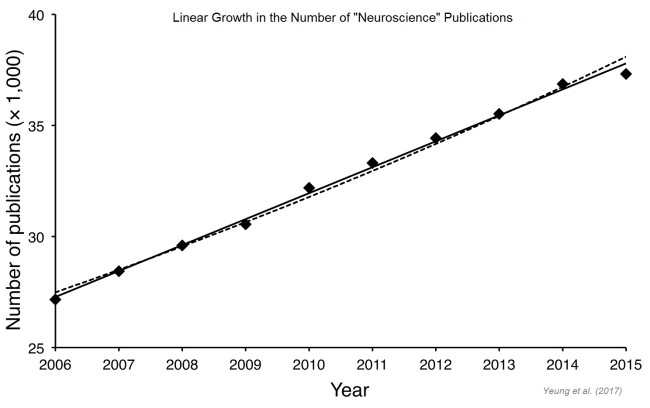 Looking at which kinds of papers received the most citations, Yeung et al. noticed a shift towards the more psychological and behavioural side of brain science. The Web of Science "Psychology" category went from #6 in terms of citations in 2006 up to #1 in 2015, while "Behavioral sciences" went from #3 to #2. The more biological areas of neuroscience, such as "Physiology" and "Biochemistry, molecular biology", declined in terms of citations. A sign of the times?

A breakdown of papers by the national affiliations of the authors reveals the growth of Chinese neuroscience over the 2006 to 2015 period. While just 3% of papers had at least one author based in China in 2006, by 2015 this had risen to over 11%. China has overtaken Germany, the UK, Japan, and other countries such that China is now #2 on the world neuroscience authorship list. 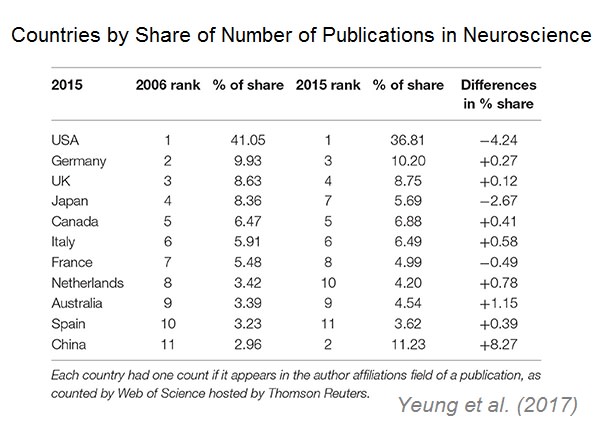 Finally, Yeung et al. tracked the impact factor (average citations per paper) of ten "core" neuroscience journals over time. This reveals little change from 2006 to 2015 although the venerable Journal of Neuroscience (established 1981) has lost some ground to Neuroimage (founded 1992). 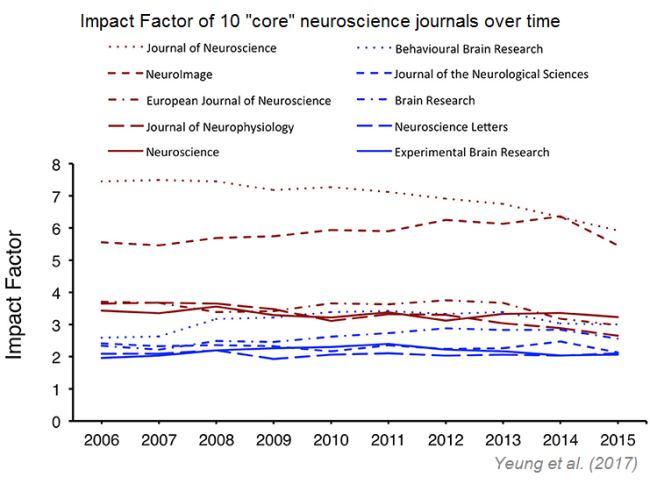 Overall, this is an interesting little paper. The results don't contain any big surprises, but it's nice to be able to see where neuroscience is going.