The Geek Rapture and Other Musings of William Gibson 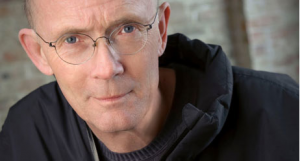 Earlier today I saw a conversation with William Gibson, the inaugural event of this year's Chicago Humanities Festival. It took place on the set of an ongoing play on Northwestern University's campus, mostly cleared off for the event save for two pay phones. This reminder of our technological past joined forces with persistent microphone problems to provide an odd dys-technological backdrop to a conversation about the way our lives are changing under the tremendous force of technological change. Some of Gibson's most fascinating comments were about how our era would be thought about by people in the far future. If the Victorians are known for their denial of the reality of sex, Gibson said, we will be known for our odd fixation with distinguishing real from virtual reality. This comment resonated with me on many different levels. Just a couple weeks before, I had lunch with Craig Mundie, the head of Microsoft Research, prior to a talk he gave at Northwestern. He told us about some new directions they are taking one of their hottest products, the Kinect. The Kinect is a camera for the Xbox gaming system that can see things in 3D. One of their new endeavors with this camera is to allow you to create 3D avatars that move and talk as you are in real time, so you can have very realistic virtual meet-ups. This is now available on the Xbox as Avatar Kinect. The second direction is the real time generation of 3D models of the world around you as you sweep the Kinect around by hand, called Kinect Fusion. With this model of the world around you, you can start to meld real and virtual in some very fun ways. In one of his demos, Mundie waved a Kinect around a clay vase on a nearby table. We instantly got an accurate 3D model up on the screen - exciting and impressive from a $150 gizmo. I've had to create 3D models of stuff in my own research, and that's involved hardware about 100 times more expensive. Even more impressive, Mundie next had the projected image of the 3D model of the vase start to spin, then stuck his hands out in front of the Kinect and used movements of his hand to sculpt it, potter-like. It was wild. All that was needed to complete the trip was a quick 3D print of the result. Further demos showed other ways in which the line between reality and virtuality was being blurred, and it all brought me back to the confluence of real and virtual worlds so well envisioned by the show I advised during its brief life, Caprica. Gibson's right. We haven't yet moved beyond our need to identify what belongs to what when it comes to digital and physical worlds, so we constantly consecrate it with our language. Ironically, some of that very language was created by him: "cyberspace," a word Gibson coined in his story "Burning Chrome" in 1982. During the conversation today, led by fellow faculty member and author Bill Savage, Gibson said he's less interested in its rise than to see it die out. He sees its use as a hallmark of our distancing ourselves from who we are as mediated by computer technology. He thinks the term is starting to go out of use, and he's happy about that -- in his view, there's no need for a word about a space that we are constantly moving through the coordinates of, as we do each time we go on to twitter, facebook, google+, and other digital extensions of self. It's not cyberspace anymore: it's our space. It seemed inevitable that a question about The Singularity would be put to Gibson in the Q&A. Sure enough, it was the final note, and Gibson dispatched it with typical incisiveness. The Singularity, he said, is the Geek Rapture. The world will not change in that way. Like our gradual entrance into cyberspace, now complete enough that marking this world with a separate term seems quaint, Gibson said we will eventually find ourselves sitting on the other side of a whole bunch of cool hardware. But, he feels our belief that it will be a sudden, quasi-religious transformation (perhaps with Cylon guns blazing?) is positively 4th century in its thinking.