We read this week that

'Black Box' Warning on Antidepressants Raised Suicide Attempts A so-called “black box” warning on antidepressants that the medications increase the risk of suicidal thinking and behavior in kids may have had a horrible side-effect. New research finds the warning backfired, causing an increase in suicide attempts by teens and young adults.

The research in question is

this paper in the British Medical Journal

from Harvard researchers Christine Lu and colleagues. The move that supposedly backfired was the US Food and Drug Administration (FDA)'s 2004 decision to issue an official 'black box' warning concerning the fact that antidepressants may cause suicidal thoughts and behaviors in children and teens. Lu et al say that this warning was followed by decreased antidepressant use in this age group but, ironically, the rate of suicide attempts rose.And while the authorsnever outright state that the FDA's warning caused the extra suicide attempts, they strongly imply that, using phrases such as

It is disturbing that after the health advisories, warnings, and media reports [...] we found substantial reductions in antidepressant treatment and simultaneous, small but meaningful increases in suicide attempts.

Are they right to be disturbed? By my reading - no. Their data just don't support a causal effect. The reason why is quite simple: 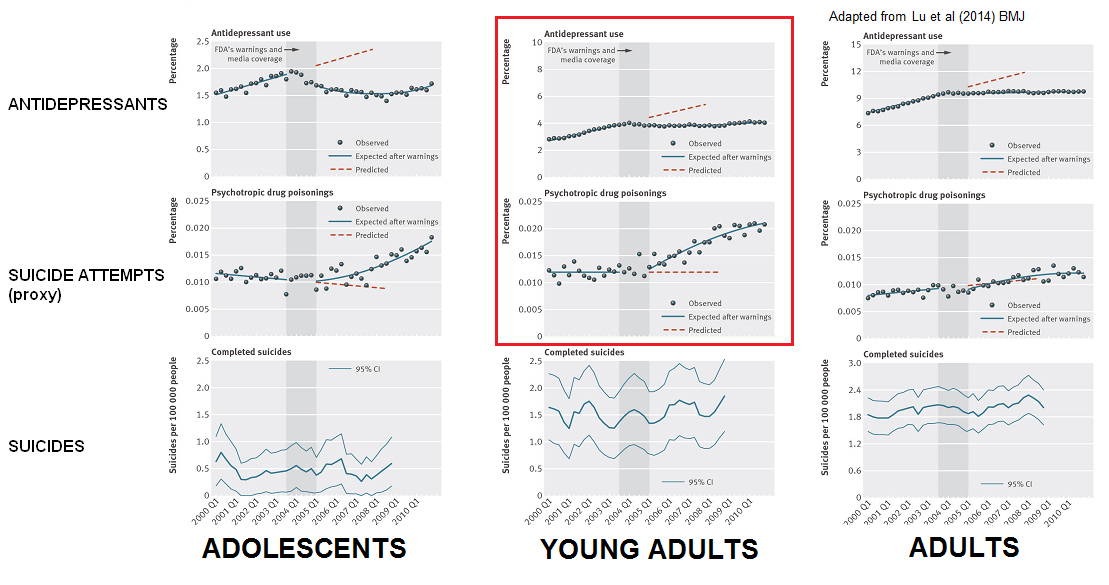 "we found substantial reductions in antidepressant use [...] among adolescents and young adults".

What Lu et al. mean is that antidepressant use in young adults 'fell' relative to what it 'would' have been, sans FDA warning, i.e. assuming that the previous increasing trend had continued (shown as the red dashed line on the graph). But that's silly. By that logic, when a child becomes an adult and stops growing, their height 'decreases'! Extrapolated red dashed lines aside, there was no decrease. So that's that. But I must point out that many of the critics of this paper have also been silly. Check out the BMJ  'Rapid Responses'. There's some good comments there, but they are accompanied by tenuous speculation and irrelevant pontificating about antidepressants. The key point about the non-existent 'decline' in antidepressant use in young adults was made by Dr Mark Olfson and later by Dr Bernard Carroll. But these sensible voices were drowned out by the sound of axes being ground and dead horses beaten. Finally, while these results don't establish that decreasing antidepressant use increased suicides, they equally provide no evidence that it decreased them. Rather, Lu et al.'s study joins the many others that have found no correlations between antidepressant use and suicide rates, in either direction, at a population level.