The Case of the Quantum Brain 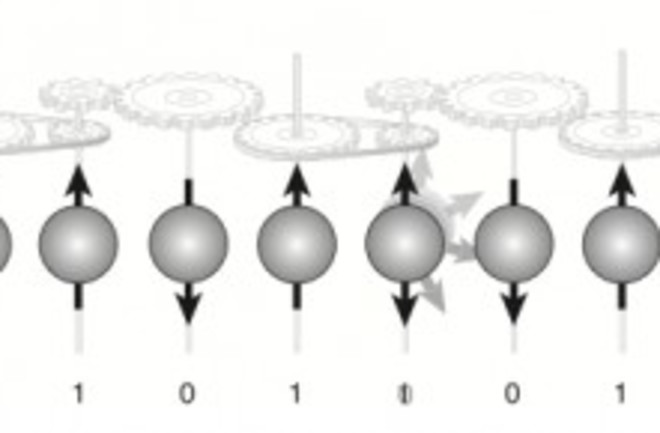 From A Shortcut Through Time by George Johnson. courtesy Alfred A. Knopf There is another, rather mind-blowing explanation for how Oliver Sacks’s twins, in their contemplation of prime numbers, might perform billions of computations in their heads: their brains were quantum computers. Consider, in a heroic suspension of disbelief, what that would mean. In an ordinary computer the elements that are manipulating the ones and zeroes of binary code are transistors or some kind of electronic switch. Tiny as they are -- microscopic -- each is still made of a huge number of atoms. They behave according to the crisp, hard-edged laws of classical mechanics. Calculations in a quantum computer are performed instead by single atoms or single subatomic particles. A different, more fundamental kind of physics kicks in. All of the divisions required to test the primeness of a long number could be carried out simultaneously in quantum superposition (like Schrodinger’s Cats in various states of oneness and zeroness, dead and alive). The quantum counters -- the qubits -- are connected not with wires but through the phenomenon called quantum entanglement (Einstein’s “spooky action at a distance.”) And they are capable of factoring numbers (or so it has been demonstrated on paper) far faster than the most powerful digital machines. They can take a shortcut through time, which was the name of a book I wrote about the subject. So, venturing further out on this limb (which is about to break any minute and plunge into the abyss below), let’s suppose that the twins weren't calculating with their neurons, nature’s slow, squishy version of computer chips, but with the individual atoms from which the neurons are made. Or, more specifically, with microtubules -- units that make up the cytoskeleton of neurons and other cells. Stuart Hameroff at the University of Arizona has developed an elaborate theory in which electrons in this microscopic scaffolding can become entangled with electrons in the scaffolding of other neurons. The result would be a biological quantum computer. The theoretical physicist Roger Penrose, in three long books, lays out a forbiddingly complex argument in which quantum computation gives rise to human consciousness and the ability to commune with the mathematical purity of the Platonic realm. This is all part of a small school of thought that rejects the idea that the brain works by processing information -- that what it does instead is noncomputational, as Sacks thought was true with the twins. Hardly anyone else believes this. The reason we don’t see spooky superpositions out on the street is because the slightest jostling -- one atom vibrating against another -- will corrupt the quantum purity and cause the calculation to collapse. That is why the experimental quantum computers developed in physics labs operate only at temperatures near absolute zero. And anyway -- why would the twins be able to tap this deep well and perform great mathematical feats closed off to the rest of us? There is a whole shelf of books on the notion that the brain is doing something beyond computation. The philosopher Colin McGinn gives a taste of this thinking in a review of Ray Kurzweil's new book, How to Create a Mind, in the current New York Review of Books. I’ll be writing more about these things, on and off over the next year, but for now let’s consider a far likelier explanation for Sacks’s extraordinary report. The twins were widely known for happily remembering and reciting long numbers. Maybe, unbeknown to Sacks, someone taught them a few six-digit primes. Or, as Pepijn van Erp suggests, it is not so unlikely that the brothers, in their numerical jousting, might have stumbled across a few primes by chance. When Sacks gave them a 10-digit prime they were simply marveling at its length not its nature, and then they matched it with some equally long number of their own. Sacks never directly says -- though he strongly implies it -- that he checked the number in his book. And doubts have been raised (in a letter to The Journal of Autism and Developmental Disorders) about whether such a book even existed then. As the twins kept topping each other with longer and longer numbers there was, as Sacks writes, no way to check. And he didn’t save the information or consult someone with access to a computer that could have run a test. He had already convinced himself that his subjects had to be generating primes. So he moved on to the next neurological oddity that caught his attention. Just last month (this was also in the NYRB) Sacks reflected on the fallibility of memory. He was describing a conversation he had with his older brother after the publication of Uncle Tungsten. In the memoir Sacks described a frightening experience from his childhood -- when a German fire bomb landed in the back yard of the family home in London. But as he learned from his brother, they both had been away at boarding school when that happened. He had learned about the incident in a letter from his father. “A very vivid, dramatic letter,” his brother told him. “You were enthralled by it.” Sacks was dumbfounded. “Although I now know, intellectually, that this memory was ‘false,’ it still seems to me as real, as intensely my own, as before.” This is a prelude to a wonderful essay about cryptomnesia, embracing stories about Coleridge, Helen Keller, Ronald Reagan, George Harrison, Sigmund Freud, and the maverick ideas of neuroscientist Gerald Edelman (another NYRB regular). Sacks is a writer with a beautiful mind. He closes with his thoughts on memories not as recordings but as creations and re-creations -- rough, malleable versions of the past. “We, as human beings, are landed with memory systems that have fallibilities, frailties, and imperfections -- but also great flexibility and creativity,” Sacks writes. What we believe and honestly report as fact can turn out to be artful embellishment. Stories too good to check. Related posts: Oliver Sacks and the Amazing TwinsThe Mystical Mathematics of Rock and RollIdiot Savants and Prime Numbers