The Case of the Bishop's Brain

In an unusual new paper, a group of German neuroscientists report that they scanned the brain of a Catholic bishop: Does a bishop pray when he prays? And does his brain distinguish between different religions? The researchers were Sarita Silveira and colleagues of Munich, and they used fMRI to measure brain activity in "a German bishop aged 72 years". He's said to be "an eminent representative of the Catholic Church in Germany." I assume he removed his mitre before entering the scanner. 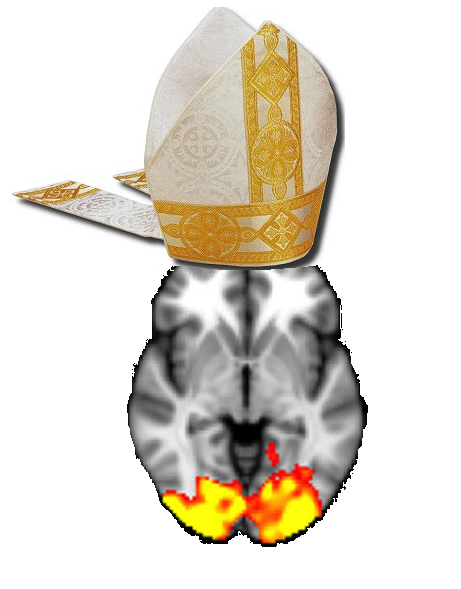 Silveira et al. had the bishop perform some religious-themed tasks, but the most interesting result was that there was no detectable difference in brain activity when the bishop was praying, compared to when he was told to do nothing in particular (i.e. the resting state). The authors say that "For the resting-state scan, the bishop was instructed to keep his eyes closed without falling asleep and not to think of anything in particular." Then he was asked to pray: "The bishop was asked to keep his eyes closed and to continuously pray in his mind the 'Our Father' prayer" Each condition lasted 10 minutes. It turned out that there were functional connectivity did not differ between the resting and the praying periods. This led Silveira et al. to the somewhat cryptic conclusion that "a highly religious person may pray always - or never." 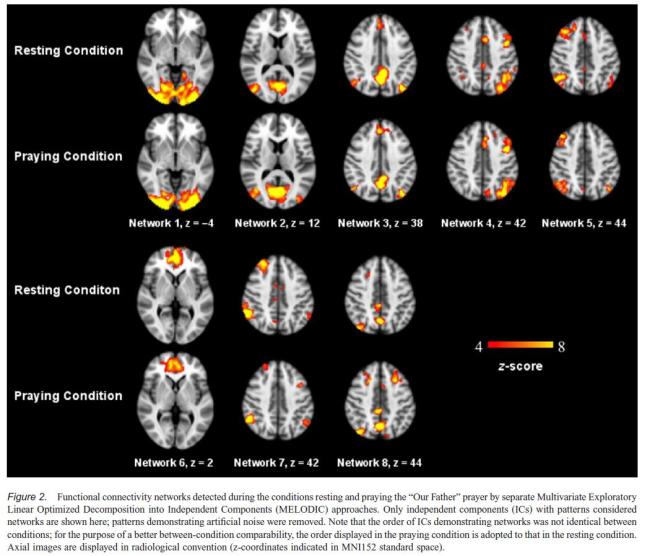 Hmm. Perhaps this is not so surprising. The brain's resting state networks are active whenever we're not performing a 'task'. But mentally reciting the well-known Lord's Prayer (Our Father) is unlikely to be a demanding task for a Bishop, or for any Catholic really. I mean, even I, an atheist, can still recall that prayer verbatim because I went to a church school twenty years ago. I could mentally recite it for 10 minutes, but I wouldn't really be 'praying', just reciting. Perhaps Silveira et al. should have scanned Richard Dawkins as an atheist control group. The authors also acknowledge that "Our interpretation of the absence of effects is partly based on accepting the null hypothesis of nonsignificant effects... the absence of evidence does not imply the evidence of absence."