The Brain That Goes Through Phases: Temporal Metastates in fMRI

Do you ever feel like your brain is stuck in a rut? A new study from neuroscientists James M. Shine and colleagues reveals the existence of 'temporal metastates' in human brain activity. These metastates are modes or patterns of activity that can persist over days, weeks or even months at a time, and they seem to be related to fluctuations in energy levels and attention. The authors made use of a unique fMRI dataset, namely the results of repeated scanning of neuroscientist Russ Poldrack's brain. Poldrack (who is also one of the authors) was scanned 84 times over a period of 532 days, an average of about one session each week for a year and a half. Shine et al. examined the functional connectivity of the brain during each session, and then applied a method called affinity propagation to define clusters from the connectivity patterns. This revealed "two distinct temporal states that fluctuated over the course of 18 months". Here's a timeline showing how the dominant mode of brain connectivity changed over the study period from 2012 to 2014 in Poldrack's brain:

We can see that there are phases - of weeks and months - in which metastate #1 is constantly active, while at other times there are frequent back-and-forth flips between the two modes. A closer look at the two connectivity modes revealed that metastate #2 was associated with higher moment-to-moment 'flexibility' in the connectivity pattern across many brain regions ("visual, somatomotor, frontoparietal, and cingulo-opercular networks"), as well as higher 'systems-level integration'. 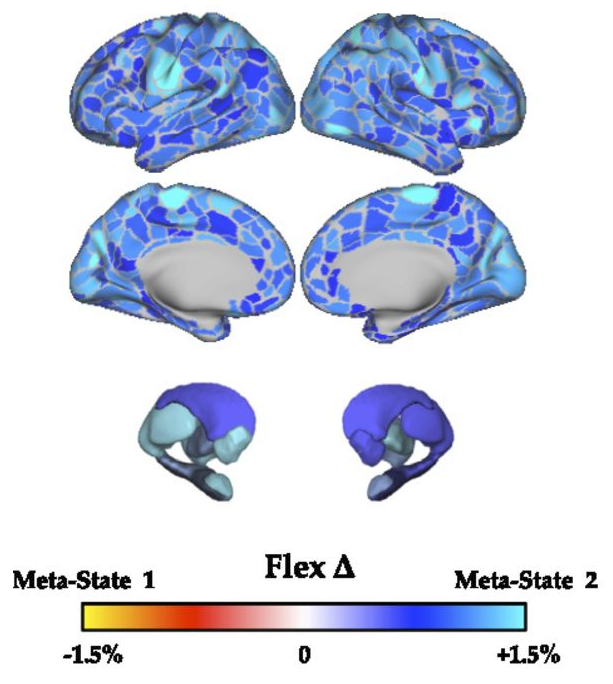 Fascinatingly, Poldrack's subjective experiences were correlated with the brain metastates. Before each fMRI scan, Poldrack completed a questionnaire, called the PANAS, which contains questions about mood and energy levels. It turned out that when Poldrack was in metastate #1, he tended to be feeling tired, drowsy and sluggish, while in metastate #2 he reported being attentive and lively. Shine et al. conclude that

In my view, this is a really interesting study and it raises a lot of questions. What, exactly, are these 'metastates'? Do they represent, perhaps, neurochemical states within the brain - changes in levels of serotonin and dopamine, perhaps? What triggers the transitions between the metastates? And how many metastates are out there? This study revealed two states in Russ Poldrack over a period of 18 months, but other individuals, in other life circumstances, might experience many other states. Shine et al. go on to discuss the possible revelance of their study to mental illness:

An important question facing the field is whether the temporal fluctuations observed in this study vary as a function of neurological and psychiatric disease. Given that impairments in attention are common in neuropsychiatric disorders and that the symptomatology of these conditions often fluctuates over time, it is reasonable to predict that the dynamic interrelationships between large-scale brain systems over longitudinal time might also become impaired in turn.

Could it be that depression, let's say, is associated with over-activation of the sluggish metastate #1?