The Brain Is Ready for Its Close-Up

Neuroscientists know that the first step in understanding something is to get a good look at it. A new book showcases their finest attempts to image the brain, from Victorian drawings to state-of-the-art brainbows. 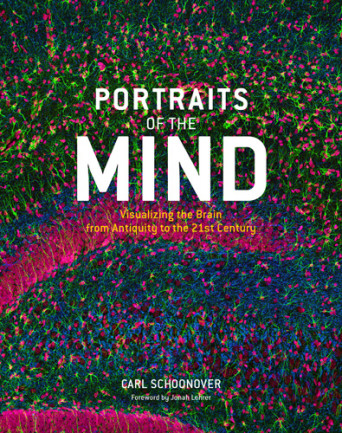 How do you track a thought, diagram an emotion, sketch the path of a memory? For as long as humans have tried to understand the mind, we've grappled with such questions. Now in a remarkable new book from Abrams, author Carl Schoonover showcases our species' tenacious attempts to make images of the brain in order to understand ourselves. The image-rich book, titled Portraits of the Mind: Visualizing the Brain From Antiquity to the 21st Century, shows the beautiful results of that quest.

"Prod the delicate matter in the head in the appropriate manner, and it just might reveal a small but important flash of insight, a clue among countless other clues," Schoonover writes in the preface. "Prod by prod, glimpse by glimpse, we can begin to form theories about brain structure and function; thus, the history of neuroscience is the history of the techniques we employ to delve into the brain." The book ranges from the earliest cell-staining techniques to the high-tech methods that yield today's "brainbows" and intricate maps of neural architecture. Here we present a sampling of our favorite portraits. 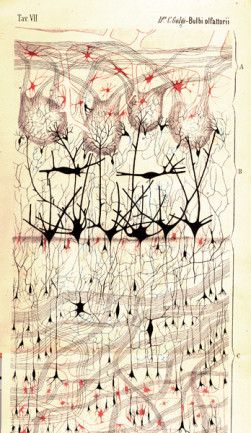 Those few early scientists who were bold enough to cut open cadavers, from the Roman Galen to the Renaissance-era Vesalius, advanced the understanding of anatomy dramatically but didn't glean much information when it came to the brain. To the naked eye, the lumps of gray matter revealed few secrets. But the 19th century Italian scientist Camillo Golgi had the advantages of microscopes, and the cell staining technique he went on to invent opened the way for modern neuroscience.

By treating slices of brain tissue with a chemical solution, Golgi revealed the delicate structures of individual brain cells, from dendrites to axons. The drawings he created from his observations helped establish a truth of brain science--that the brain can be understood on its most basic level as an organized collection of individual neurons. This drawing of a dog's olfactory bulb dates from 1875. 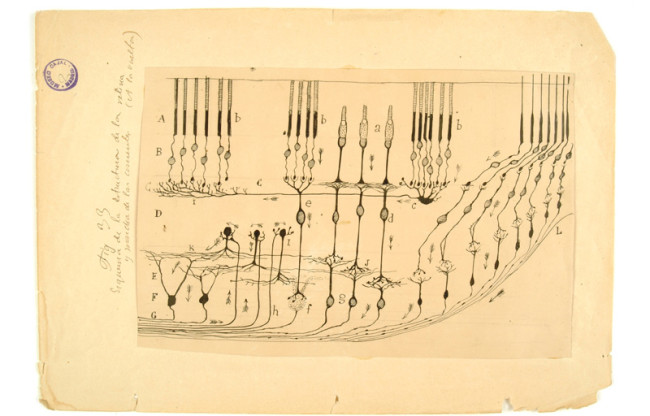 Once Golgi invented the staining technique that allowed unprecedented views of the neurons, the Spanish scientist Santiago Ramon y Cajal went on to do remarkable things with the method. Portraits of the Mind quotes a piece of Cajal's writing in which he rhapsodizes about the results: "What an unexpected spectacle! On the perfectly translucent yellow background, sparse black filaments appeared that were smooth and thin or thorny and thick, as well as black triangular, stellate, or fusiform bodies! One would have thought that they were designs in Chinese ink on transparent Japanese paper."

Cajal, who is sometimes called the father of modern neuroscience, used Golgi's method to describe the structure of neurons in new detail. Most importantly, he discovered that individual neurons don't connect with each other, paving the way for the realization that they communicate across synapses. This drawing of the eye's retina, dating from 1901, indicates the flow of information through neurons via small arrows. 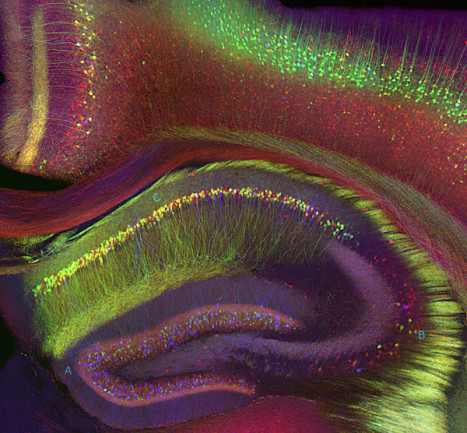 Through the 20th century, neuroscientists gradually tracked particular brain functions to specific regions. Sadly, the most efficient way to determine such a linkage was to find a patient with an injury to a specific region of his brain, and then to establish which of the patient's faculties were impaired.

One of these patients was H.M., an epileptic who went under the surgeon's knife at the age of 27--the doctors stopped his seizures, but they also cut into a brain region called the hippocampus and inadvertently destroyed his ability to form new memories. For the rest of his life, until he died in 2008 at the age of 82, he could only hold a thought for about 20 seconds. Yet H.M. could clearly remember things from before his surgery, and could also form new "motor memories"--for example, after many repetitions he performed a difficult drawing task with ease, but had no memory of doing it before. Such results helped researchers understand the role of the hippocampus, which is shown in cross-section at the bottom half of this 2005 image. 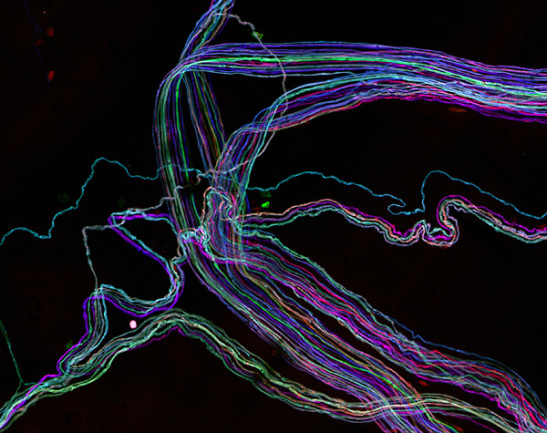 We have luminescent jellyfish to thank for one advance in neuroscience. By sticking the genetic code for the jellyfish's green fluorescent protein in cells, researchers made them glow green (a neat trick that won the 2008 Nobel Prize in chemistry). Most importantly, this could be done in living animals and tissues, allowing researchers to watch neurons in action. To sort out the tangle of brain cells, molecular chemists next searched out fluorescent proteins in other colors, and found innovative ways to make neurons glow in slightly different hues.

This "brainbow" image traces the long axons of individual neurons in a gorgeous array of colors. The image, produced in 2007, shows motor neuron axons stretching away to the muscles they control. 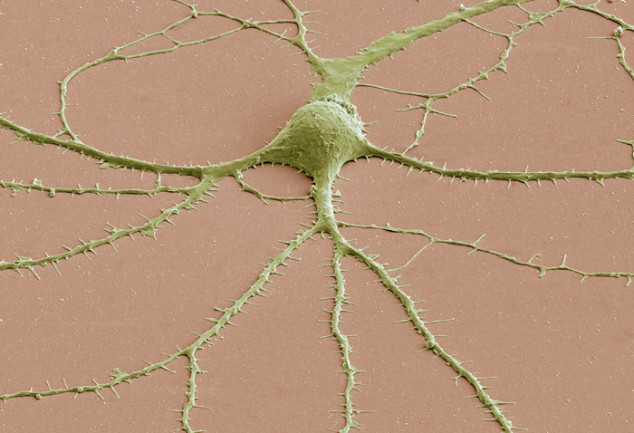 To get an even better view of a neuron, the tool of choice is an electron microscope. While this tool can provide breathtaking close-ups that can't be achieved with optical microscopes and fluorescent staining, this type of imaging has its limitations. Portraits of the Mind explains that it "requires placing the specimen in a high-vacuum, high-radiation environment, thus completely ruling out studies in live brains."

This 2009 image reveals the main cell body, or soma, or a spiny neuron, with its dendrites radiating away. To produce the image, a scanning electron microscope sent a beam of electrons across the surface of a sample; a detector kept track of where the electrons bounced off the surface to reveal the outlines of the cell. 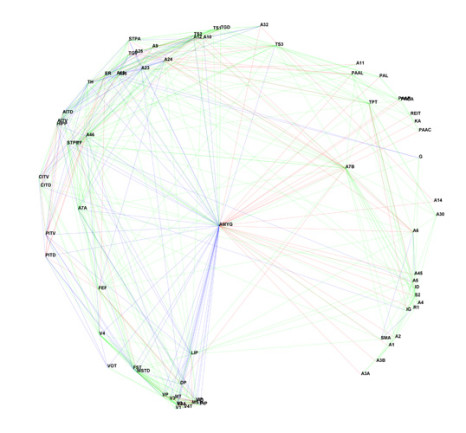 Remember those little arrows that Santiago Ramon y Cajal added to his drawings to indicate the flow of information through the neurons? With that detail, Portraits of the Mind states, "Cajal established the overarching conceptual framework under which we approach the brain--the circuit." But understanding the patterns of connections between brain cells and regions is no small task. Even our fastest supercomputers can't yet simulate the interactions between the billions of neurons in a human brain.

This image from 1994 illustrates the brain as a circuit diagram and focuses on a region called the amygdala, which plays an important role in fear and other emotions. It summarizes the connections between the amygdala (in the center) and many different areas of the cerebral cortex, including regions responsible for reasoning and high-level decision making. This wiring diagram makes it clear that emotions and reasoning are bound strongly together. 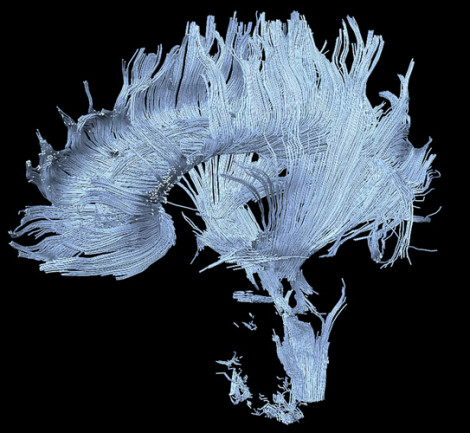 Many of today's most exciting imaging techniques give researchers insight into both brain structure and function. Portraits of the Mind calls this type of imaging tool a mindoscope: "a tool that can probe the workings of the mind (the intangibles of conscious experience) and establish how they are linked to the anatomy and function of the brain (structure, chemistry, neural activity)." Tools like functional magnetic resonance imaging (fMRI) allow researchers to watch blood flow to specific regions of the brain, which serves as a proxy for the activity of those neurons.

One new method called diffusion MRI reveals major axon pathways by tracking the flow of water molecules through the brain. While the technique is still under development, researchers think it may have many useful clinical applications. This diffusion MRI image, from 2008, shows the brain of a patient who suffered a stroke in the thalamus and midbrain, resulting in broken and disrupted axon tracts (visible at bottom). Each line represents thousands of axons. 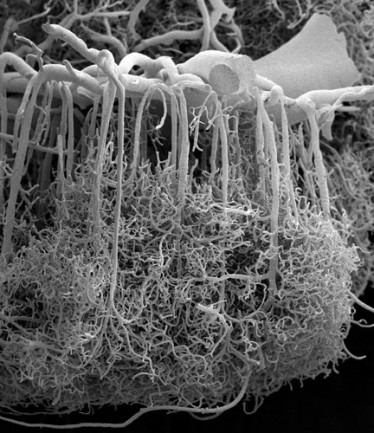 In brain imaging, most of the attention understandably goes to the neurons. But the intricate network of blood vessels that bring oxygen to every neural nook and cranny are vitally important as well. For a broad view of the blood vessels in a living subject, researchers inject an agent that absorbs X-rays into the blood and then snap an X-ray picture.

But for a close-up of the microscopic capillaries that interface with brain cells, different tools are needed. This 2009 image used a scanning electron microscope to zoom in on a slice of a postmortem cortex. It shows the large blood vessels from the surface of the brain at top, and reveals the cascade of smaller and smaller vessels that dive down into the cortex. This type of imaging can't yet be done on a living brain. But if the history of advances in neural imaging is any indication, it's just a matter of time until we come up with something equally amazing. 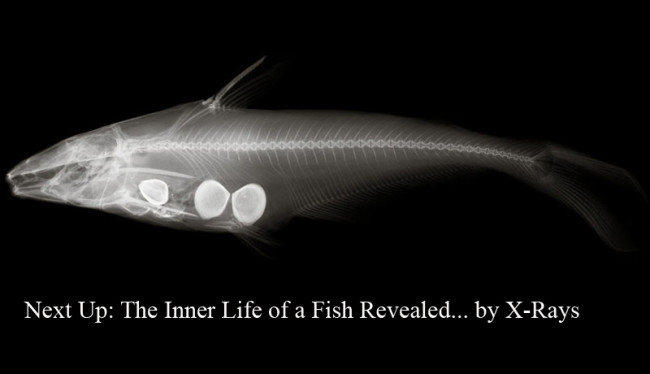