The Brain: A Tiny Key to a Terrible Lock

Scientists have traced chronic pain to a defect in one enzyme in a single region of the brain. Could this be a decisive turn in the battle against pain? 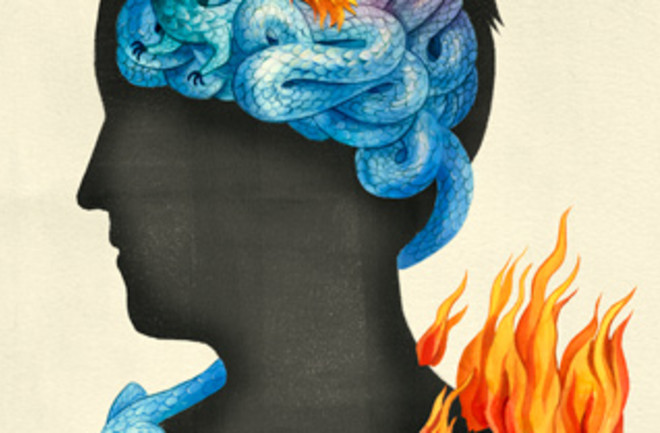 For tens of millions of Americans, pain is not just an occasional nuisance—a stubbed toe, a paper cut—but a constant and torturous companion. Chronic pain can be focused on an arthritic knee or a bad back, diffused throughout the body, or even located virtually in an amputated limb. It can linger for years. And it can transform the world so that merely the light brush of a finger is an agonizing experience. The daily devastation can be so intense that people with chronic pain are up to six times as likely as those who are pain-free to report suicidal thoughts.

Despite the toll, chronic pain has been relatively neglected by doctors. Perhaps that’s because it seems less real to them than other, more tangible medical disorders. With no equivalent of a stethoscope or thermometer to measure pain objectively, they have had to rely entirely on their patients’ testimony.

As neuroscientists learn more about the biological basis of pain, the situation is finally beginning to change. Most remarkably, unfolding research shows that chronic pain can cause concrete, physiological changes in the brain. After several months of chronic pain, a person’s brain begins to shrink. The longer people suffer, the more gray matter they lose.

With that bad news, though, comes a message of hope. In documenting the damage that chronic pain causes, neuroscientists are also beginning to decipher how it comes to exist in the first place. Those insights suggest better treatments and cures.

Normally, pain is triggered by a set of danger-sensing neurons, called nociceptors, that extend into the organs, muscles, and skin. Different types of nociceptors respond to different stimuli, including heat, cold, pressure, inflammation, and exposure to chemicals like cigarette smoke and teargas. Nociceptors can notify us of danger with fine-tuned precision. Heat nociceptors, for example, send out an alarm only when they’re heated to between 45 and 50 degrees Celsius (about 115 to 125 degrees Fahrenheit), the temperature at which some proteins start to coagulate and cause damage to cells and tissues.

For all that precision, we don’t automatically feel the signals as pain; often the information from nociceptors is parsed by the nervous system along the way. For instance, nociceptors starting in the skin extend through the body to swellings along the spinal cord. They relay their signals to other neurons in those swellings, called dorsal horns, which then deliver signals up to the brain stem. But dorsal horns also contain neurons coming down from the brain that can boost or squelch the signals. As a result, pain in one part of the body can block pain signals from another. If you stick your foot in cold water, touching a hot surface with your hand will hurt less.

Once nociceptor signals enter the brain, they wend their way through a labyrinth of connections. Neuroscientists have recently started to use brain imaging machines to track this journey. In a study published last year, Irene Tracey of the University of Oxford and her colleagues had 16 volunteers lie in an fMRI scanner. The researchers then trained a laser at the right foot of each volunteer and fired tiny pulses. Though all the pulses were of equal strength, volunteers reported that some of them felt like pinpricks while others were painless. The team found that a whole constellation of regions located throughout the brain became more active when the volunteers reported that the laser hurt.

Further investigation has shown that no one region in this pain network is solely responsible for making us feel pain; it is their collective activity that makes us wince. Tracey and her colleagues explored this process by studying the connectivity between specific regions of the pain network. In some people, the neurons in the regions studied fired in unison. In other people, they weren’t so tightly linked. The more in sync a person’s pain network was, the more likely he or she was to report that a laser pulse felt painful.

Our sensation of pain also depends on outside sources of information beyond the nociceptors. The Oxford team demonstrated this effect with another experiment. They told a group of volunteers that they were part of a study to test the safety of a laser, which would zap their feet. Each zap would hit one of six spots. Some of the spots had already been approved as safe, the subjects were told; others had been approved only with reservation; yet others had not been approved at all because they were susceptible to harm. Asked to pay close attention to how the laser felt, the subjects knew which spot would be zapped next by looking at a monitor as they lay in an fMRI scanner.

In reality, the experiment was entirely safe. Yet the volunteers tended to report that the unapproved spots hurt more than the approved ones. The knowledge they got from the scientists influenced their sensation of pain. The fMRI scans revealed that when the subjects saw they were about to be zapped on an unapproved spot, a region of the pain network called the anterior insula became active. The researchers concluded that the anterior insula was integrating information about the experiment with the sensations from the foot, priming the pain network to feel a little stab.

Experiments like Tracey’s show that pain is much more than a direct response to a stimulus. That makes sense when you think about the biological function of pain. Pain helps us defend ourselves from harm, and deciding what’s harmful and what isn’t can require some careful—if unconscious—deliberation. Pain protects us long after we are hurt. If we suffer a bruise or a broken bone, it can remain painful for days or weeks. That prolonged agony may be unpleasant, but it can aid our survival by forcing us to let wounds heal. And pain protects us by stim­ulating and strengthening neural connections in the brain, forcing us to associate the sensation with the memory of what we did to cause it. As time passes, we store the memory of the pain without vividly reliving it every day.

But for millions of people the memory doesn’t fade and the pain doesn’t go away. To A. Vania Apkarian, a neuroscientist at Northwestern University, the connection between the living memory and the never-ending pain suggests a glitch in the brain. Ordinary pain might turn chronic, he hypothesizes, when inflammation caused by conditions like arthritis or nerve damage provokes an abnormal rush of signals from nociceptors. When these aberrant signals reach the pain network in the brain, Apkarian argues, they overwhelm it. The brain doesn’t get a chance to forget the pain. Instead it learns to feel it continuously. Eventually the neural connections become so strong that we no longer need the original stimuli anymore. The network begins to sustain itself, continually relearning its pain. It can also send signals back down into the body, turning previously painless sensations into painful ones.

Apkarian’s theory may soon be confirmed in the most meaningful way possible, with a new treatment for chronic pain. The drugs currently used to treat chronic pain—aspirin and morphine along with other opiates—don’t work very well and are often addictive. To develop better drugs, scientists are trying to move beyond trial and error and to base their research on our growing knowledge of what causes pain.

To that end, Min Zhuo, a neuroscientist at the University of Toronto, has been testing out potential painkillers on mice. But first he had to give the animals chronic pain, by crimping a nerve in one of their legs. In a matter of days, the mice developed many of the symptoms—and even some of the brain alterations—seen in people with chronic pain.

Zhuo and his colleagues then sought out compounds that could interfere with the learning that goes on during chronic pain. They focused on the behavior of neurons in a region of the brain called the anterior cingulate cortex, which shows especially intense activity in scans of people with chronic pain. The cingulate cortex contains an abundant amount of an enzyme called AC1. Zhuo wondered if the neural learning that leads to chronic pain was accelerated when levels of the enzyme were high.

As a test, Zhuo’s team genetically engineered mice so that they could not make enzyme AC1. The animals turned out almost entirely normal. They could even sense regular types of pain. But when Zhuo tied off a leg nerve, the mice didn’t develop chronic pain.

Once Zhuo recognized that AC1 is essential for chronic pain, he started the hunt for a drug that could interfere with it. He grew cells that produced enzyme AC1 in culture and then added hundreds of different compounds, hoping that one would latch on to the enzyme and thus block its action. Eventually he and his team found one that did, naming it NB001. When scientists gave an oral dose of NB001 to rats suffering from chronic pain, the animals were rid of their symptoms in just 45 minutes. By latching onto AC1, it seems, the drug prevented the neuronal activity that makes chronic pain possible.

NB001 shows a lot of promise. With its focus on the pain engine in the cingulate cortex instead of the entire brain and nervous system, it is particularly targeted. And there are no obvious side effects in labora­tory animals; the rats suffered no harm to their memory or their ability to learn. Zhuo hopes to launch clinical trials in humans soon.

There is no guarantee that NB001 will work as intended, since people and rats have major biological differences. Tinkering with the anterior cingulate cortex—one of the human brain’s supreme multitaskers, involved not just with pain but also with the regulation of emotion and decision-making—is a delicate process. Unforeseen side effects could easily emerge. Yet even if this specific drug doesn’t reach the marketplace, NB001 represents a milestone. It shows that scientists fighting pain are, at long last, leaving the guesswork behind. Now we know where chronic pain lives.