The Best Flavor of Geoengineering Stills Leaves a Bad Taste 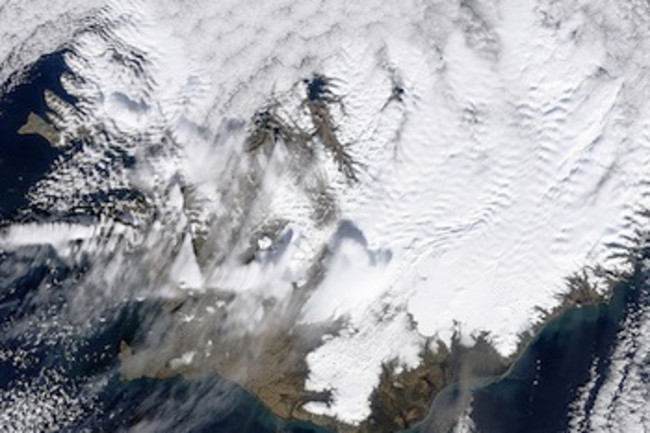 The Eyjafjallajökull eruption as seen by NASA’s Terra satellite In theory, geoengineering seems like the ideal remedy for our climate ills. Some white reflective roofs here, a little ocean fertilization there, a few simulated volcanic eruptions, and voilà! you have a potential fix for one of the world’s most intractable problems. But there's good reason to believe that many of these proposed schemes would prove much costlier to the planet over both the short- and long-term than more mainstream approaches to addressing climate change—and leave a number of critical problems, like ocean acidification, in the lurch. Take the injection of sulfate aerosol particles into the stratosphere, which I alluded to earlier. The idea would be to recreate the cooling effects of a volcanic eruption by blanketing the sky with a thin layer of particles that would reflect a fraction of incoming sunlight back into space. For this method to put a crimp on greenhouse warming, studies estimate that it would have to cut solar radiation by roughly 1.8 percent—not an easy feat by any means, but not entirely out of the question either. In addition to being (relatively) cheap, costing around several billion dollars a year according to some projections, stratospheric geoengineering would actually be doable. In a recent paper, Alan Robock of Rutgers University and his colleagues suggested that it could be done by sending fleets of military planes to dump large quantities of sulfur gas into the lower stratosphere several times a year. While it all sounds good on paper, it’s worth emphasizing, as if it wasn’t obvious already, that much of this is still highly speculative. The rapidly changing nature of climate models, from which most of these findings are drawn, also makes it inherently difficult to predict with any uncertainty what this scheme’s exact outcome will be. What is certain, however, is that it would have a fair number of unintended consequences—almost all of which would be bad. According to a new paper in Nature Geoscience, stratospheric geoengineering, or “solar-radiation management,” as the authors refer to it, would affect different parts of the world differentially (go figure), helping to cool down some countries while cooking others. It would deal a particularly harsh blow to many parts of Africa and Asia, disrupting rainfall and storm patterns and fomenting drought-like conditions. The particles would also spur the destruction of the already vulnerable ozone layer, hindering the recovery of the Antarctic ozone hole and blasting a few new ones. To compound matters, the cooling effects would be short-lived—a few years at best—and many of the problems would only become worse with time. In other words, it’s mostly a lose-lose situation: stop short and you lose the benefits; keep going and you continue to dig yourself into a hole. It shouldn’t come as too much of a surprise then that the authors’ main takeaways are that: 1) regional geoengineering isn’t such a great idea and that 2) reaching any sort of agreement on the “right” amount of geoengineering needed will be, shall we say, tricky. But what is the alternative? Sure, there are a number of other proposed methods on the docket, ranging from solar shields in space (I kid you not) to carbon dioxide-sucking artificial trees, but most researchers would point to stratospheric geoengineering as being the one with the most promise. Which isn’t exactly encouraging. Of course, very few scientists are genuinely enthusiastic about the prospects of unleashing geoengineering unto the world. Most would argue that much more research is needed before we can engage in a serious conversation about relying on it and, even then, it should only be deployed in conjunction with other time-tested mitigation strategies. Given the global community’s sluggish, half-hearted response to climate change, it is unfortunately probably only a matter of time before a few governments decide to take matters into their own hands. And, if anything, I can easily imagine some variant of these techniques being eventually used to “terraform” (i.e. make more Earth-like) Mars and other currently inhospitable planets—think Star Trek II’s Genesis device but much slower and less cool and advanced. That is, unless an alien race gets to us first and reverse-terraforms our planet like in The War of the Worlds.