The Animal Superpower That Robots Would Love to Have: Great Efficiency 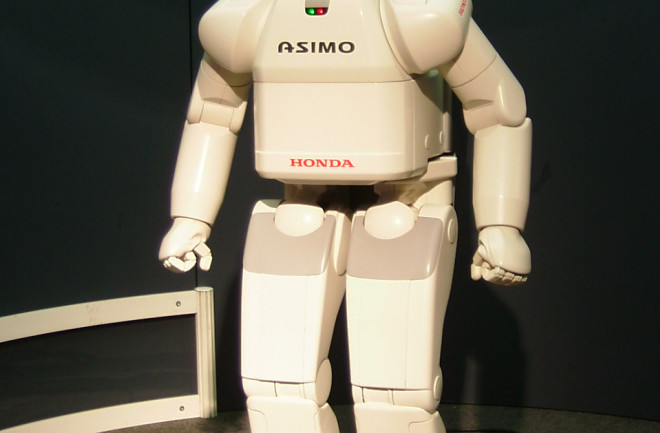 If we were ever to have a game of Survivor, the Trans-Galactic Edition, where all life forms across our local cluster of galaxies competed against each other to avoid getting voted “off the cluster,” there’d be a few attributes that might make us animals alliance-worthy. As we make worried glances toward the Stromulans from J5231, a plasma-cloud form of life with a level of consciousness far beyond our own (but alas, rather picky about what environments they will live in), we might trumpet our ability to form bodies of trillions of cells based on one single starting cell, our fantastic mobility, and the cultural productivity of our human species, which has led to amazing innovations like the George Foreman Grill. But one of our greatest and most unsung advantages is our ability to efficiently convert the food we eat into all the energy we need to sustain our daily activities. Take walking, for example: contemporary robots like Honda’s Asimo can use up to 30 times more energy than we do to walk. Given that in former times we spent much of our waking life walking around in search of food, we would have needed to find a whole lot more food to eat were it not for this efficiency. (Research on so-called passive walkers, which incorporates some of the energy saving tricks of human walking, has demonstrated in-the-lab efficiencies similar to humans, but are a ways off in terms of being commercialized. See link to "Cornell Ranger Robot" at the end of this post for more information). As another example, the animal I do research on, an odd fish that hunts at night in the murky rivers of the Amazon, only needs about 4 milliwatts of power to run. That’s not a whole lot of juice--a thousand times less than an iPhone uses, and about ten thousand times less than the light you might have on if you’re reading this at night. With that tiny bit of power it sustains not only its body and brain, but also its “electric headlamp,” an organ in its body that continually emits a weak electric field so it can sense things in the dark. We have started to unlock some of the clever tricks underlying this fish’s energy efficiency, essentially showing how it can trade off the energy it needs to move with the energy it needs to gather information.

The black ghost electric fish from the Amazon only uses 4 milliwatts of power. Thanks to new animal-tracking techniques, we've recently learned about remarkable animal abilities to go long distances without so much as a nibble. As Carl Zimmer has described on sister blog The Loom, a bird called the Bar-tailed Godwit can fly 11,000 kilometers without stopping. Eels swim from the coasts of Europe to the Sargasso sea, 6,000 kilometers away, without eating. As for humans, not only is our walking efficient, but Daniel Leiberman has built up a strong case for the importance of exceptionally efficient long-distance running in our evolution. Folks who build autonomous robots take note of the energy cleverness of animals, since one of the big challenges in our field is extending “autonomy time” – the time a robot can work without intervention – and currently this is constrained by its energy needs. (Robots working on The Spill are mostly powered through cables carrying electrical power from the surface and are therefore not autonomous.) My lab is working on a robotic implementation of an extremely energy-efficient fish (the Amazonian fish mentioned above). Other groups are working on robotic jellyfish, flies and bats. As efficient as these systems are becoming, they all have relatively short autonomy times because batteries need to be small or else too much energy is lost in doing the work to carry them. Instead of carrying the energy, what about eating it? Roboticists have long dreamed of powering their devices by food to increase autonomy time. There has been some limited progress on that front. Back in 2000, Stuart Wilkinson developed “Chew Chew,” a three-meter-long train powered by sugar cubes. This was accomplished by a microbial fuel cell in which bacteria broke the food down and released electrons to charge a battery. More recent efforts include a robot out of the UK that eats flies for power--mind you it can only travel at 10 centimeters an hour, hardly fast enough to catch one. In a different approach, water currents around underwater robots can be exploited to generate energy. Such “energy harvesting” approaches are being investigated to help power highly efficient robotic jellyfish, among other applications. Work on microbial fuel cells has progressed slowly, however, and energy harvesting can only work in cases where there’s ambient and easily convertible energy at hand. Recent new developments on the food-to-power front may, as it were, re-energize the field. As 80beats reports, scientists have developed a transistor powered by ATP -- the very fuel of your brain cells (all cells in fact). A different group has developed a fuel cell that converts glucose into electricity and implanted it in rats, generating 6.5 microwatts for sustained periods of time. While this seems an inconsequential amount of energy, pacemakers only use 10 microwatts, so such a system could have a large benefit to people who have pacemakers. As every aspect of how we consume, produce, and--regrettably--spill energy commands our attention, our understanding of how animals convert food to fuel and the remarkable efficiency with which they use it could hardly have more relevance. While these breakthroughs can’t stanch a spill of millions of gallons of oil, they can inform new technologies that reduce our energy needs. To the consternation of dogs everywhere, we could even see a day when our robotic helpers power themselves with our leftovers. Photograph of the black ghost knifefish Apteronotus albifrons courtesy of Per Erik Sviland