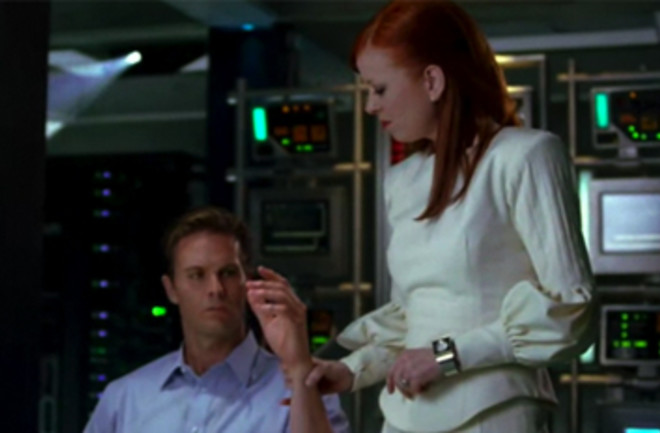 Monday night was the last new episode of Terminator: The Sarah Connor Chronicles until February. The subplot featured Agent Ellison's hesitant attempts to tutor a nascent artificial intelligence that may or may not grow up to become Skynet, the computer system that attempts to destroy humanity in the future. To speed the process, Ellison's boss has hooked the A.I. up to the recovered body of a previously-dispatched terminator, explaining to the horrified Ellison that "Many believe that tactile experience is integral to A.I. development." This was a spot on statement, directly echoing the work of people like Rodney Brooks and his colleagues at the MIT Computer Science & Artificial Intelligence Laboratory.Brook's thesis is that it's a bad idea to try to program artificial intelligences from the top down--that is, attempting to create a disembodied A.I. in a computer that then tries to make sense of inputs from the world, e.g. from a video camera, or have its outputs hooked up to control a robot. Instead of starting with the mind, Brooks believes that the robot's body should come first, and that sophisticated behavior can emerge from the bottom up as a computer embedded in the robot struggles to control its body and interact with the real world. The interaction is critical, as it provides a feedback loop that enables the A.I. to figure out what works and what doesn't in a way that's intimately matched to its body and its environment. In A.I. circles, this idea is known as embodied cognition or embodied intelligence. Brooks and his students have used this approach to build some impressive robots that can accomplish seemingly quite purposeful behavior with limited computational resources. For example, Cynthia Breazel's Kismet is a robot that convincingly mimics the emotional responses of a small child. But probably the most familiar standard bearer of Brooks' approach is the humble Roomba, built by iRobot, a company cofounded by Brooks. The Roomba is a robot vacuum, and the first really successful home robot. In many ways the Roomba is a lot less sophisticated than earlier attempts to build home robots. Navigating around the crowded, irregular, and ever-changing spaces that humans live in is a particular challenge for robots, and many earlier designs featured sophisticated sensors and powerful processors that allowed the robot to build up a map of the rooms it found itself in and chart a path around objects. Instead the Roomba simply works through a small repertoire of movement behaviors, not caring about exactly where it's going. It detects objects by bumping into them. It monitors the amount of dirt it's picking up, and once an area appears clean it simply wanders off in a new direction until it finds some more dirt. In this way eventually the entire room is covered. It's not incredibly efficient, but it's not you that's doing the work, it's the robot, and it gets the job done. The Roomba's limited intelligence is perfectly matched to the idiosyncrasies of being a vacuum cleaner, allowing iRobot to churn out a successful consumer product instead of getting hung up on trying to perfect the most efficient general purpose robot A.I. possible.