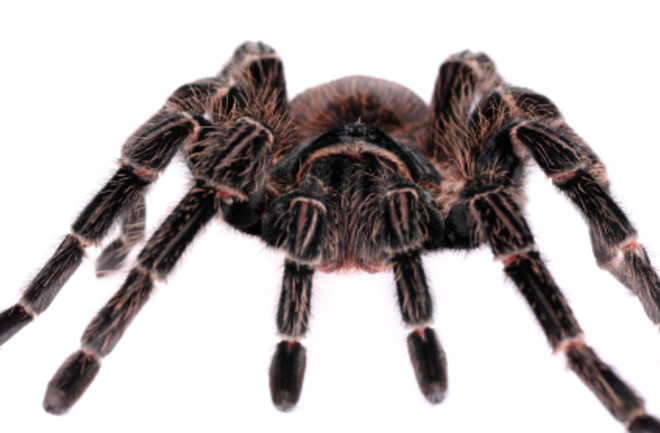 For a study out in this week's Proceedings of the National Academy of Sciences, Dean Mobbs and colleagues put their subjects through this fright fest to sort out how the brain responds to different parts of a threat. It's not all about the presence of a creepy crawler, Mobbs found—it's whether that creepy crawler is creeping closer.

As the spider advanced, MRI scans allowed researchers to see flashes of activity switch from the volunteer’s prefrontal cortex – a region associated with anxiety – to a spot in the midbrain known to involve intense fear. But the neural terror waned when the tarantula retreated, “regardless of the spider’s absolute proximity,” wrote the study’s authors. In other words, as long as the spider was moving away, no matter how close it still was, the volunteers relaxed. [MSNBC]

But how do you get a tarantula to move where you want? Tape it, Mobbs says.

He explained that the volunteers were actually watching an elaborately rigged video of a tarantula which they believed was near their foot, since getting the spider to do the same thing for each volunteer would have been impossible. [Reuters]

Before scaring the subjects with the spider video, Mobbs and colleagues asked them to predict how scared they'd be. By doing this, the team also found an expectation error: People who expected to be freaked out before the experiment also believed the tarantula to be bigger than it truly was when asked after the experiment. Those expectations could be one route through which phobias develop, and improving the understanding and treatment of clinical phobias is why Mobbs is terrifying people with giant spiders.

But why tarantulas? Why not rats or bats or scorpions? “The UK has one of the highest amounts of spider phobics in the world. This is despite the fact that we have no deadly spiders in the UK,” Mobbs said. [MSNBC]

80beats: The Chemistry of Instinct: Here’s What Makes Mice Freeze in Fear

80beats: Mammals Have a Nose for Danger (Literally)