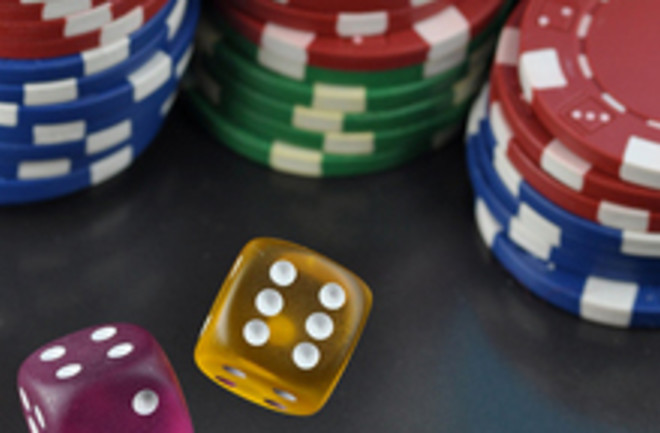 Whether your fear is panicked, like in a life-or-death situation, or deliberative, like a decision about whether to take a big risk on game show, it all comes back to the amygdala. And a new study of patients with lesions on the amygdala, reported by Caltech scientists in the Proceedings of the National Academy of Sciences, suggests that damage to our brain's fear center might turn people into reckless gamblers. The researchers found two women with Urbach-Wiethe disease, which results in damage to the almond-shaped amygdala. Benedetto De Martinoa and his team paired those two with 12 people with undamaged brains, and presented everyone with a series of gambling tests.

. The women with Urbach-Wiethe, however, would keep rolling the dice as the odds got worse, and in some cases would even play if the potential loss was greater than the potential gain. Two, of course, is a pretty small sample size. But that problem is unavoidable, the researchers say.

Urbach-Wiethe patients are particularly valuable to science, showing how damage to one particular area of the brain can change a person's behavior.

The PNAS findings also back up what some of the same researchers have documented in previous studies, that the amygdala might be responsible not only for more primal fears, but also for social fears and inhibitions. Last year study coauthor

Ralph Adolphs led a separate study of a patient with amygdala damage and found that her understanding of personal space was far different from most people's (she stood much closer during conversation), and she struggled to pick up signs of fear or aggression in other people. Says Adolphs of the newer work:

Related Content: 80beats: An Acidic Brain Leads to Panic; A Deep Breath Can Fix That 80beats: Jell-O Shots in Adolescence Lead to Gambling Later in Life DISCOVER: Conquering Your Fears, One Synapse at a Time DISCOVER: Emotions and the Brain: Fear

More From Discover
Mind
Can't Resist a Black Friday Deal? Here's Why
Mind
What Is Dissociative Identity Disorder?
Health
What You Can Do About Seasonal Depression
The Sciences
3 Historic Hoaxes That Duped The Masses, Scientists Or Media
Mind
4 Things You Should Know About Cognitive Dissonance
Mind
Why Do We Get Our Best Ideas In The Shower?
Recommendations From Our Store
My Science ShopDiscover STEM Kits
My Science ShopDiscover 2022 Calendar
My Science ShopStrange Science
My Science ShopElements Flashcards
Shop Now
Stay Curious
Join
Our List