Study: A "Pessimistic" Dog Is More Likely to Destroy Your Slippers 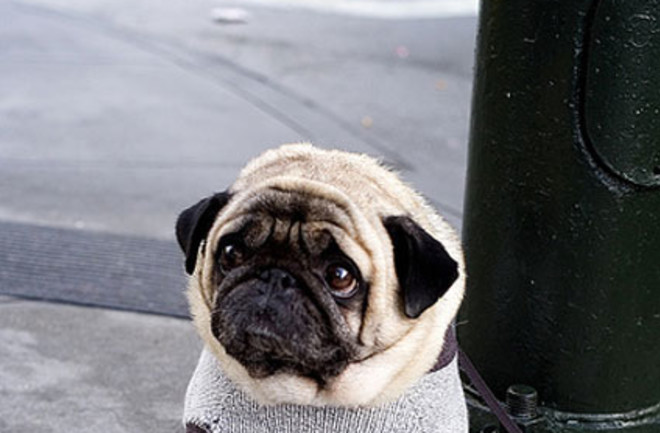 Doggie separation anxiety--the whining, scratching, and general misbehaving that happens when some dogs are left home alone--is somehow linked to the dog's general outlook on life, new research says. Coauthor Emily Blackwell explains that she wondered whether the behavior she'd observed during high school in her own anxiety-prone dog was normal.

"So many people think [separation-related behavior] is just something dogs do." ... They think the dog is angry the owner is leaving, say, and exacting its revenge on the owner's slippers. [ScienceNOW].

, published in Current Biology, the team investigated the link between this separation anxiety trait and a pessimistic attitude. To test pessimism, 24 dogs were trained to associate a full food bowl with one side of a room and an empty bowl with the opposite side.

The dogs learn quickly "if it's on one side, to race over and nearly knock over the screen to get it," says Blackwell. "If it's on the other side, they look around and quite often give us a big sigh." Some dogs amble over to check out the empty bowl; others just lie down. [ScienceNOW]

When these trained dogs encountered an ambiguously placed bowl--positioned in the middle of the room--some of them approached it enthusiastically, while others didn't get their hopes up. The test is apparently similar to those used to test optimism vs. pessimism in other species, including humans. The researchers labeled enthusiastic pups as having optimistic personalities, because they might be thinking something like, "Hey, maybe there's food, woohoo!" Those that took little interest in the ambiguous bowls were said to have a more pessimistic attitude: "Meh, there probably isn't food (Eeyore-style sigh)." Next, the researchers correlated the dogs' enthusiasm with how likely they were to show signs of separation anxiety when left alone in a room. The dogs the showed more signs of anxiety, like chewing, howling, or scratching, were also the pessimistic ones.

"Many dogs are left on their own and they are fine with it. But a large proportion of dogs get very anxious about it and this helps to explain why," [lead author Rachel] Casey said. "However, as yet we don't know whether it is cause and effect. We don't know whether being left alone is more likely to make a dog pessimistic, or whether being pessimistic is more likely to make a dog anxious when left alone." [The Independent]

The UK's Royal Society for the Prevention of Cruelty to Animals funded the study; the group hopes to learn why some dogs suffer from separation anxiety, which would make it easier to put them in homes that are well suited for their personalities. Not all researchers are buying Blackwell's correlation. Marc Bekoff

, an evolutionary biologist, isn't sure the food bowl test is the best way to understand optimistic and pessimistic tendencies in dogs. Other researchers worry about assuming dogs have human-like thought processes, saying that words like "inquisitive" or "exploratory" might better describe an animal's behavioral traits. Another researcher, Samuel Gosling

, thinks that the gloomy attitude and separation-related behaviors can both be chalked up to a dog's level of neuroticism, which can include high levels of worrying:

"Dogs high on this anxiety-and-neuroticism dimension are more likely to get upset when the owner leaves," he suggests, and would be less likely to show interest in the food bowls, too. [ScienceNOW]

80beats: Will Dog Cloning Become Mainstream as the Price Drops?