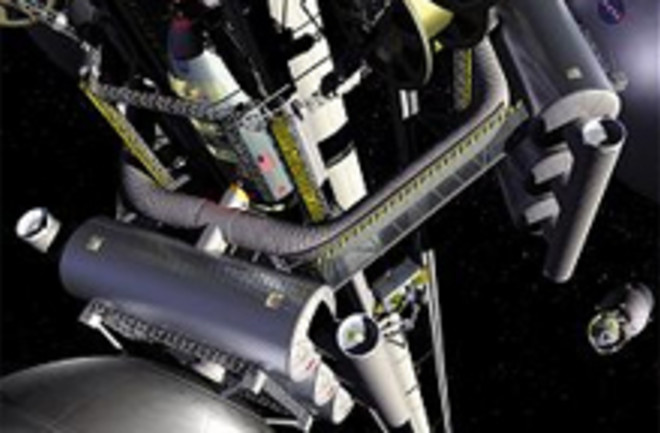 My colleague Eliza Strickland over on 80 Beats has a post about researchers who want to build a new world of out of buckypaper, a superstrong material that has applications ranging from an airplane construction material to lightweight display screens. There's some online buzz wondering if this material would be strong enough to make the space elevator a reality. If you haven't heard the term, a space elevator is a cable or ribbon that extends about 100,000 km into space from an anchor point on the equator. Glorified elevators car shuffle cargo and people in and out of orbit, eliminating all that mucking about with dangerous rockets and with the ability to move payloads for a minute fraction of the cost of current boosters. A space elevator could make a lot of big space projects -- like orbiting solar power plants -- suddenly very doable. The idea was first thought of over a century ago, and most notably popularized by Arthur C. Clarke's 1979 novel The Fountains of Paradise. In recent years, interest was renewed with a new (and much more practical) elevator design pioneered by Brad Edwards . The material used to build the cable/ribbon will have to be incredibly strong, and nothing even close currently exists: this is the primary technical obstacle to building the elevator. In Edwards' design, carbon nanotubes were tapped for the job (a choice that was loosely prefigured by Clarke's "pseudo diamond.") The theoretical strength of nanotubes is more than enough to do the job -- the problem is getting naotubes to cooperate in practice. They are difficult to make in long stretches, and while individually strong, tend to slip past each other, weakening the material Hence the excitment over the recent buckypaper announcement -- a real composite material that relies on carbon nanotubes for its strength. Unfortunately, the current strength is given as being about half that of IM7, the current leader in the composite world. By the end of next year they expect to match IM7. A back of the envelope calculation shows that at full IM7 strength, this buckypaper would have a tensile strength of about 56,000 kg/cm2. This is about 33 per cent stronger than steel wire, a pretty impressive feat in itself, but one that falls well short of the 1,300,000 kg/cm2 figure for a nanotube composite material that Edwards used as a baseline in his design. Still, it's a big step in the right direction, and we could be watching the factories start spinning space elevator cable sooner than we think Image from NASA