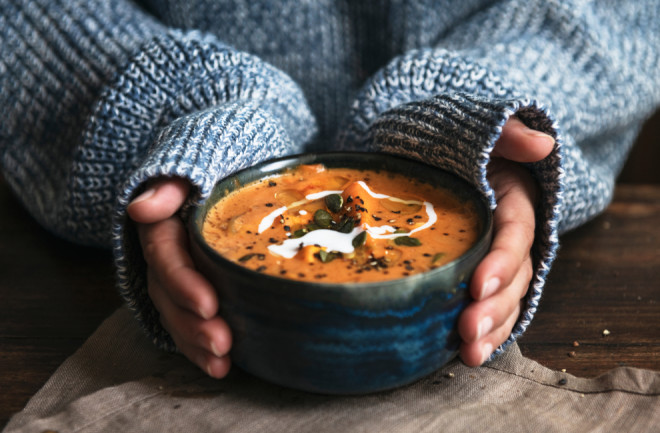 A new psychological study has found that social exclusion made test subjects feel literally cold, and increased their preference for warm beverages and soup. It's the latest finding from the field of embodied cognition, in which researchers have shown that the language of metaphor can activate physical sensations, and vice versa....

“We know that being excluded is psychologically painful,” said the lead author, Chen-Bo Zhong... “and here we found that it feels just like it’s described in metaphors,” like icy stare and frosty reception [The New York Times].

Researchers conducted two experiments in the study, which was published in the journal Psychological Science [article not yet online].

In the first, they divided 65 students into two groups. They asked the first group to recall a time when others left them out. The second group recalled a time when they were included by others. In the middle of this, purportedly in response to maintenance staff, they were asked to estimate the temperature of the room [WebMD].

They found that the students who had been remembering an emotionally painful moment of rejection estimated that the room was much colder than the other students. In the second experiment, the researchers had participants play a computer-simulated ball-tossing game in which some people were passed the ball more often than others, so some volunteers felt included and others felt excluded. Afterward, the participants had to rate the appeal of various foods and beverages, such as hot coffee, crackers, an ice-cold Coke, an apple and hot soup [LiveScience].

The students who had been left out displayed a much stronger preference for the coffee and the soup, researchers found. Experts say it's already widely accepted that environmental cues influence people's ideas and actions; pyschologist Joshua Ackerman says this new study offers a new angle of the phenomenon.

"The logical next step is to understand how this [idea] translates back to our perception of the environment, and this [new study] is a good example of that next step," Ackerman said [ABC News].

More From Discover
The Sciences
4 Crazy Facts to Know About Your Nose
Mind
You May Be Hallucinating Right Now
Planet Earth
Filmmaker Aronofsky Talks Science and Exploring Planet Earth with Will Smith
Health
Loss of Smell Identification Linked to Dementia, Parkinson’s
Mind
Are People More Prone to Supernatural Thinking if They Believe in the Afterlife?
Health
What Causes Brain Freeze?
Recommendations From Our Store
My Science ShopDiscover STEM Kits
My Science ShopDiscover 2022 Calendar
My Science ShopStrange Science
My Science ShopElements Flashcards
Shop Now
Stay Curious
Join
Our List