Snikt! Say Hello to the Frog With Wolverine Claws 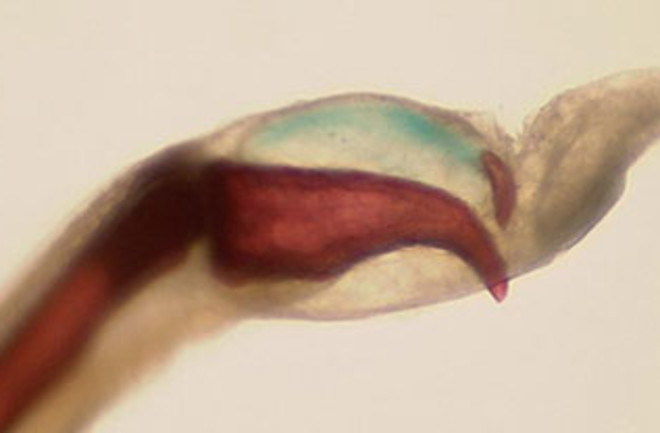 One of Marvel Comics' most popular characters is undoubtedly Wolverine, the enigmatic Canadian special agent-turned-X-Man (think Hugh Jackman) with the bad-ass claws—long, super-strong knives, essentially, that extend out from his knuckles when he's fixing to apply a beat-down. (Back when I was a kid, the claws were reputed to be surgically implanted by a twisted project run by the Canadian government, but they were later revealed to be a natural part of his mutant skeleton. Duh.) But someone forgot to tell the skin on his knuckles about those claws—every time they come out to play, they just slice right through the obstructing flesh. Now it turns out that there are 11 species of frog with a very similar ability: When the little amphibians are threatened, they flex a muscle that actually extends a barbed piece of bone out through the skin on their fingers and attack with their newly exposed weapons. Harvard biologist David Blackburn unwittingly discovered the strange trait when he picked up one of the frogs and it lashed out with its hind leg, drawing blood. Blackburn, who is continuing research on the live frogs, says "It's surprising enough to find a frog with claws.... The fact that those claws work by cutting through the skin of the frogs' feet is even more astonishing.... Most vertebrates do a much better job of keeping their skeletons inside." Most, indeed. No word yet if the frogs have Wolverine's superfast healing ability so that those claw-holes heal up nice and fast. Image:Biology Letters/David Blackburn]