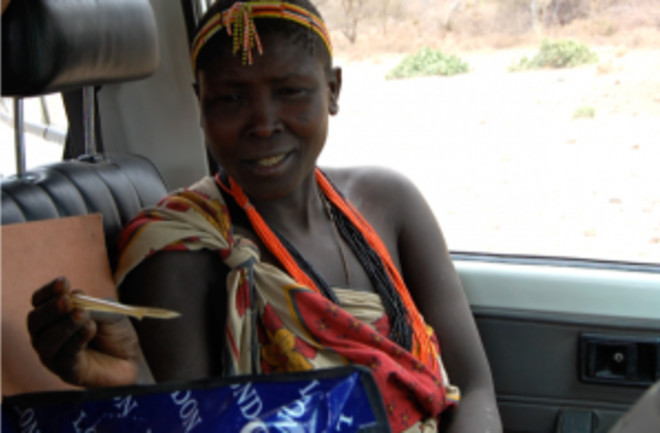 Once upon a time (er, yesterday), we might have thought a character trait like generosity was something deeply ingrained by life experiences or even decided by a person’s genes.

But research today in Current Biology suggests that a person’s propensity to share is highly dependent on one thing: how much the people around them – currently – are sharing. A person’s generosity as recent as last year has no correlation to their generosity now.

Scientists learned this while studying cooperation in the Hadza hunter-gatherer societies of Tanzania. The Hadza live in camps of about 30 people, each made up of a few nuclear families.

The camps move geographically every few weeks, and families move between camps regularly. This structure makes Hadza society a perfect setup for investigating whether a personality trait is maintained over time, or if it changes with new social surroundings.

To look at generosity of individuals across camps and over time, the researchers used what’s called a public goods game, a concept borrowed from economists.

In these games, individuals are given an opportunity to keep or share some or all of a “good” they’re offered. Shared goods go into a pot where they will be multiplied and then distributed to the whole group. Individuals don’t know each other’s choices.

Food sharing is an important part of the Hadza’s hunter-gatherer culture, and honey is a favorite food. So the researchers used honey sticks as the good to share (or not) in the game.

To play, they’d offer each Hadza four honey sticks. They could keep any number of sticks, and contribute any number to a box. For every stick in the box, the researchers promised to add three more before distributing them to everyone in the camp after everyone had played. No one knew anyone else’s contributions to the box.

The researchers learned that members of a camp were always similar to one another in how much they shared. But across camps, sharing varied significantly – camps were easily sorted into those with good sharers and bad.

But Hadza people had not sorted themselves into like-minded groups over time, with the good sharers seeking out other good sharers. Instead, individuals’ generosity changed over time.

How much each person shared was related only to how well members of their current camp were sharing. How much they shared in their previous camp, as recent as one year prior, was irrelevant. In other words, a previously selfish person became generous when they joined a generous camp, and vice versa.

“The robustness of that result was really surprising,” says Kris Smith, a University of Pennsylvania scientist who led the research. Coren Apicella, his colleague at Penn, agrees.

“It was surprising, and from a scientific perspective, it was nice to have such findings year after year," she says. "That we found it in four different years was really cool, and it was really strong.”

In the future, Smith plans to look into how the Hadza think the other people in their camp intend to behave. And many other questions remain, such as how these social norms are communicated.

This could be particularly interesting, Apicella says, because Hadza society operates without the formal institutions we might think of as keeping people in check: written laws, police or even religions with judgmental gods.

Be Excellent to Each Other

Though understanding the exact mechanism will require more research, it’s clear that a person can and does become more generous by joining a generous group.

Which leaves us with an encouraging moral. “If you find yourself surrounded by selfish people, you don't necessarily have to find a new crowd,” Smith said in a statement. “But by being generous yourself, you can get others to be generous as well.”

More From Discover
Mind
Why We Are Fascinated With Serial Killers
Mind
What Happens When Scientists Put a Human Intelligence Gene Into a Monkey?
Mind
What is Anxiety and How Can Worries Overpower Us?
Mind
How Your Brain’s “Fingerprints” Could Diagnose Disease
Mind
Can't Resist a Black Friday Deal? Here's Why
Mind
Relaxing ASMR Sounds are Harder to Re-Create Than You’d Think
Recommendations From Our Store
My Science ShopDiscover STEM Kits
My Science ShopDiscover 2022 Calendar
My Science ShopStrange Science
My Science ShopElements Flashcards
Shop Now
Stay Curious
Join
Our List