Does idle chat and unhappiness go together? Eight years ago, a study was published (Mehl et al. 2010) suggesting that they do. The authors reported that "Well-Being Is Related to Having Less Small Talk and More Substantive Conversations", triggering many alarming headlines. 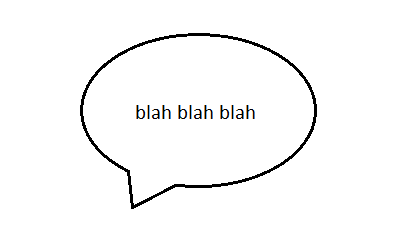 Now, however, the same researchers have carried out a much larger study and have failed to confirm the chat-unhappiness association. The new paper is published in Psychological Science, the same journal where the original appeared. What I like about this new article is that it's a good example of researchers revisiting their own work and openly changing their minds. In the original study, Mehl et al. had participants (n=79) wear an 'EAR' device that sporadically recorded brief snippets of sound throughout the day. These snippets were then categorized as 'alone' (if no speech was heard), as 'small talk', or as other kinds of conversation. The 2010 finding was that the proportion of time alone, and the proportion of talk that was small talk, both negatively predicted wellbeing. In the replication, the authors included data from three additional studies using the same EAR audio recording approach. Combined with the original sample this makes four studies with a total of n=486 participants, six times more than in the first paper. The results were, well, not as dramatic as before. The negative correlation between time spent alone and well-being was replicated, but it was considerably weakened (r = -0.19 instead of r=-0.35). There was no significant association between small talk and well-being, with weak effects being seen in Study 1 and 2 but these were absent in the larger Studies 3 and 4: 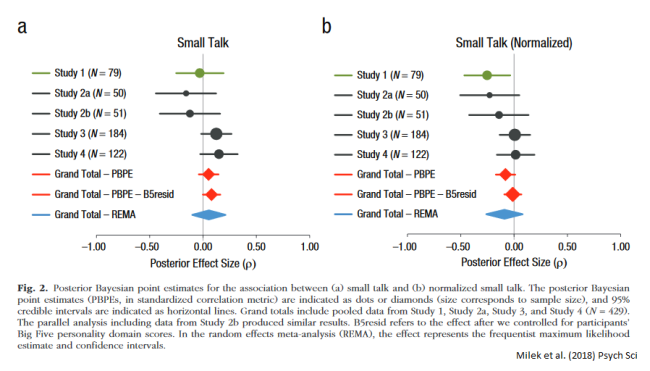 The authors conclude that small talk is not related to well-being after all:

Whether people had more or less small talk in daily life was not reliably associated with life satisfaction. This was true for the overall frequency of small talk as well as the normalized small talk–conversation ratio. The negative correlation suggested by the underpowered original study seems to have been a false-positive finding.

They also admit that their original study may have been a beneficiary of publication bias:

Mean effect estimates were somewhat smaller than the ones originally reported. This can be expected even in well-powered replication studies and is likely a result of publication bias inflating effect sizes in original studies...the original study might have been capitalizing on chance, overestimating the true effects.

However, all is not quite lost for the 'quality of talk matters' theory because while small-talk didn't predict wellbeing, the proportion of talk coded as 'substantive conversations' did positively correlated with life satisfaction, albeit weakly (r = 0.15) and less so than in the original paper. In my view, this is the kind of paper that we ought to see more of, and Psychological Science did well to publish it. The results are, as I said, rather messy, certainly compared to the original study which presented a neat and tidy picture (small talk bad, substantial talk good). But real data from large studies often are.