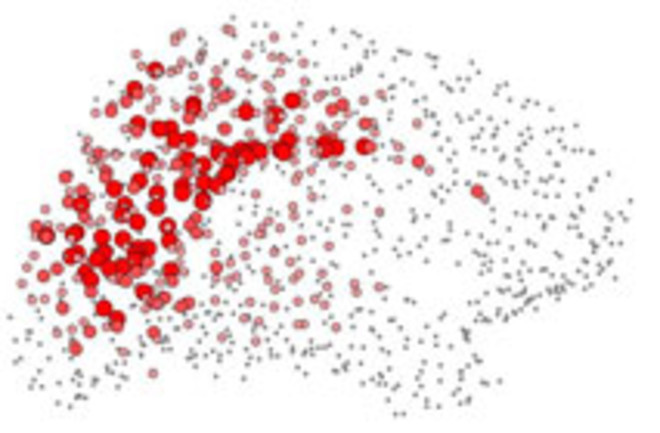 Researchers have made a map of the human brain that shows a dense network of connections at the top of the cerebral cortex, suggesting that electrical signals travel through this hub on their way to more specialized regions.

“This is just about the coolest paper I’ve seen in a long time, and forward-looking in terms of where the science is going,” said Dr. Marcus E. Raichle, a professor of neurology and radiology... who was not involved in the research. He added, “They’ve found in the brain what looks like a hub map of the airline system for the United States” [The New York Times].

An international team of researchers

used a technique called diffusion spectrum imaging to map the connections between different parts of the brain. The technique traces the path of water moving along axons, long fibers that extend from a neuron’s main body and carry electrical signals [Science News]. They found the most connections at the top of the cortex along the crack that separates the brain's two hemispheres. According to researchers, that area is not only a relay station, it's also the area that's most active when the brain is in "default mode," the activation state present when the brain is not engaged in any specific cognitive task [The Scientist].

The findings, which appear in the journal PLoS Biology, mark a major advance in the study of how the brain's structure influences its fuction.

Until now, scientists have mostly used scanners to measure hotspots of brain activity - locating which parts of the brain use more blood during perception or cognition - but there has been little understanding of the role of the underlying anatomy in generating this activity [Telegraph].

Researchers say they'll continue to use the diffusion imaging method to study the brain's connections, or the "connectome" (a linguistic extrapolation of "genome"). Now that researchers have identified the brain's hub, they can begin to study how that area is affected by strokes and other brain injuries. Examining the brain's default mode may also

yield insights into conditions such as Alzheimer's disease, schizophrenia and depression the researchers say.... Some studies are beginning to suggest that it's abnormalities in the default network, which seems to develop over time during infant development, that makes human brains susceptible to such woes [The Scientist].