Playtime Is Better With Music 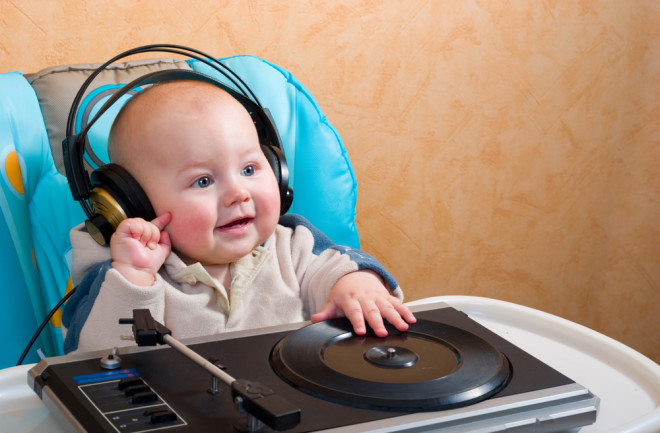 (Credit: niderlander/Shutterstock) Playtime might be all the more enriching with a waltz playing in the background. A new study from University of Washington researchers Christina Zhao and Patricia Kuhl suggests that short sessions of music training can boost a 9-month-old infant’s ability to recognize patterns in music and speech — a crucial skill for learning a language. Their findings represent another step forward for scientists who are working to establish stronger links between music and brain plasticity.

Zhao and Kuhl selected 39 9-month-old infants who were raised in an English-speaking household and shared similar musical listening experiences at home. Parents brought the babies to the lab for 12, 15-minute play sessions held over four weeks. In one session track, infants played while waltzes served as background tunes — the triple-meter structure of the waltz is considered more difficult for infants to learn. Their parents were also encouraged to reinforce the waltz musical structure by playing toy instruments or bouncing their children to the beat of the music. Babies in the control track weren’t given musical toys, and their sessions lacked the waltz soundtrack.

After the lab sessions, scientists tested infants’ speech-recognition abilities using magnetoencephalography (MEG) to monitor brain function while recordings of speech or a song played. Researchers intentionally disrupted the rhythm in the recordings, because they were looking for a particular response in the brain that would indicate an infant detected the diversion. Infants who received music training during play sessions had stronger brain responses — specifically in the auditory and prefrontal cortex — to disruptions in the recordings as compared to the control group. This suggests that music training improved infants’ ability to detect patterns in sounds, which is a fundamental skill for learning how to talk later in life. Zhao and Kuhl published their findings Monday in Proceedings of the National Academy of Sciences.

Yes, research has shown that musically trained children tend to be better at processing pitch and speech structure, but it isn’t clear how music training yields those cognitive benefits. To scientists, there are still a variety of factors that may have influenced the conclusions drawn by past studies. People born with naturally “good ears”, for example, might be predisposed to picking up an instrument early in life. It’s the old struggle between correlation and causation. Zhao and Kuhl wanted to cut through the noise and home in on the causal link between music and cognitive advantages. But even in their current study they didn’t truly isolate music from other factors — parents in the music group, you’ll remember, were encouraged to reinforce rhythm structure with bounces and toys. Future studies would incorporate more control conditions — no bouncing or toys — to engage only the auditory system and test its effects. Still, their study makes the case that music training early in life and its cognitive benefits down the road deserve more attention.