The past few years have seen many neuroscientists becoming interested in 'hyperscanning'. Rather that contenting themselves to scan just one brain at a time, hyperscanners simultaneously measure activity from two (or even more) people, using techniques such as fMRI and EEG. This technically demanding method is said to provide information about what happens in the brain(s) during social interactions. In particular, many people are excited by the ability of hyperscanning to measure synchronization (or 'hyperconnectivity') of activity between interacting brains. However, British neuroscientist Adrian P Burgess raises a note of caution in a new paper: On the interpretation of synchronization in EEG hyperscanning studies The problem stems from how we choose to define 'synchrony' mathematically. One popular metric is called the phase-locking value (PLV) over time; this is a measure of the degree to which two waves (in this case, two frequency bands from the activity of two different brains) have a consistent relative phase. The trouble is that two waves of the same frequency will tend to keep the same relative phase, even if they're not interacting with each other. So the PLV will tend to systematically overstate synchrony. It gets worse. The PLV could also 'detect' changes in synchrony in response to external stimuli. Burgess illustrates this tendency to produce spurious effects by taking some standard EEG data from a series of individuals, and then pairing them up, treating them as if they were part of a hyperscanning study. He shows that statistically significant changes in PLV 'synchrony' occur in response to simple stimuli, such as the individuals closing their eyes, or seeing a picture on a screen. See below: in this case the spurious synchronization is in the theta band: 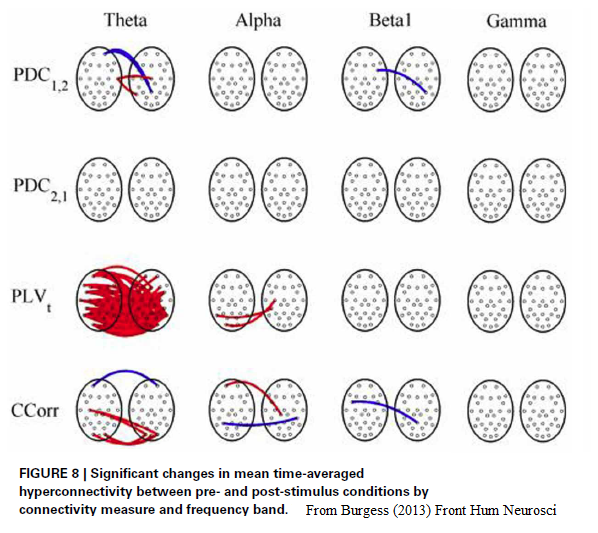 Existing measures of hyper-connectivity are biased and prone to detect coupling where none exists. In particular, spurious hyper-connections are likely to be found whenever any difference between experimental conditions induces systematic changes in the rhythmicity of the EEG.

He explains that had these dubious effects been observed in a genuine hyperscanning experiment, instead of a mock-up, they might have been seen as real (and interesting):

This strong and systematic pattern of findings using PLV in these very different paradigms is troubling because, in the absence our knowledge that these hyper-connections must be spurious, they might easily have been accepted as real... The real problem is that, although the PLV is widely used as a measure of phase synchronization, a high value of PLV does not necessarily mean there is any true phase synchronization at all.

Burgess recommends other synchrony measures, such as the circular correlation coefficient (CCorr), which, as he shows in various simulations, are much more robust. So this paper ought to be read closely by anyone involved in this kind of research. Fortunately, not all hyper-synchrony studies have used the PLV. I have to confess that I've never been all that convinced by the idea of brain synchrony in terms of the phase of brainwaves. Taking the alpha rhythm as an example, everyone has alpha waves buzzing away at a frequency of roughly 10 Hz but we never notice them (except perhaps when looking at this optical illusion). If the phase of my alpha waves suddenly reset to be in synch with yours... neither of us would notice. So what would it mean? Phase synchrony is probably the simplest measure of hyperconnectivity... but that doesn't mean it's the best one.