Perspectives on being a father 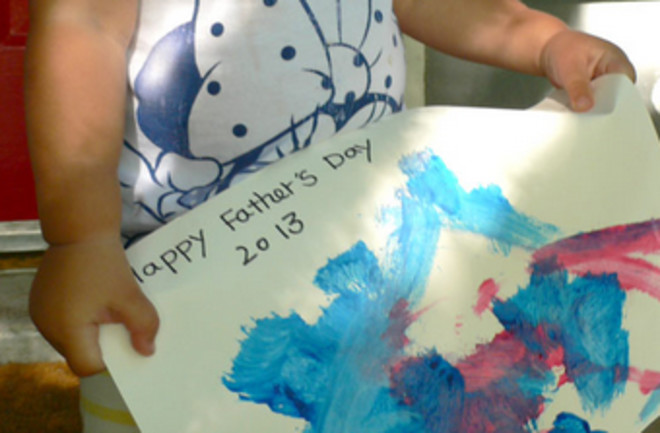 It's been about a year and a half since I officially became a father. I put the official qualifier there because I knew I was going to become a father about two years ago, and many of the psychological changes probably began then. My own reflections and lessons are obviously influenced by my own specific situation. I am not the primary caregiver. It would be too pat to say that our family is the typical college educated sort in all its details, but it is not that far from the truth. My daughter, and her parents, have resources, both financial and familial, which are not there for about half of Americans. I obviously can't speak to the struggles of working class single mothers. And the American class system being what it is I can't say I know any such women very well beyond the level of tenuous acquaintanceship.

The first reflection I want to admit is that it is one thing to assert the power of hertability in the abstract, and another to see it in the concrete. It is easy enough to do a scatterplot of a quantitative trait like height. But at very young ages of much more salience are mannerisms and other less quantifiable behavioral tics. It was immediately obvious within the first month of her life that my daughter has some of her parents' idiosyncratic habits. To give an example there is a way I pick my fingers, in particular my thumb, without even thinking about it. I share this trait with my mother. My daughter began to exhibit the same behavior in her sleep when she was less than one month old. Similarly, there are a variety of body movements where she reminds me a great deal of my youngest brother...but that is perhaps more a function of the fact that he is the one with whom I share the most in terms of biomechanical affect.

Probably one thing that helps keep my inferences and pattern matching in context and in check is the fact that I've read The Nurture Assumption. The central observation of this book is that only about ~10% of differences between children on behavioral traits seems to be due to unique parenting strategies and tactics. In other words, your choices as a parent don't matter nearly as much as you think. It turns out that about half the remaining variation is due to the genes you contribute, and the other half is unaccounted for. To many of you this may seem a trivial insight, but it isn't. Our media is saturated by arguments at the heart of which is the assumption that the role of parents is central to the development of our children. The current fad for attachment parenting is a case in point. All of these cultural currents hook into the reality that as parents you do agonize often about the most minor details of your child's upbringing, and what effects that might have in the long term. This makes sense to be, as much of life is a positional game. I have no reason to doubt that this wasn't true in the past, in which case the marginal impact of parenting on the individual level may have been quite significant. 10% might not seem like so much, but that's the difference between a B+ and an A+!

But the major problems with this assumption of the centrality of parental behavior and modeling crop up when you assume they are incredibly causal on a broader social level. This article in The Atlantic is typical, The Distinct, Positive Impact of a Good Dad. Before disputing some of the interpretation of the data I want to admit that all things equal I believe it is better to have two parents than just one. The problem is that not all things are equal. If you click to enlarge the infographic you will see that it states that "An asterisk (*) indicates a statistically-significant difference (p &lt; 0.05) indicated between the group and those who scored in the top third of relationship quality with their father, controlling for respondent's age, race/ethnicity, level of mother's education, and household income." There is one control I do not see listed there: genetics.

A stylized example will illustrate the problem as I see it. Imagine a random sample of 18 year old women who become pregnant by their boyfriend. Half of the boyfriends refuse to help support the child or enter into a lasting relationship, while half of them do so. After 10-20 years you tally the outcomes of the offspring, and you see that those whose fathers remained active in their lives had far better life outcomes when measured on broad metrics of social dysfunction such as delinquency. One inference you could make is that the environment fathers provide is essential toward stabilizing the home and allowing their children to flourish. That is the conventional conclusion that is normally made both in public and private. And, that is why you control for facts such as mother's education and income in the result above.

But if you think about it closely you see a rather obvious assumption in the model: that the genetic dispositions of the men who abandoned and those who did not abandon are the same. The sort of "man" who would abandon the mother of his child and his child is likely to have a disposition which will be passed down toward his children, even in his absence. The main blind spot with the idea that "family values" is a panacea for all of our problems is that proponents often give nurture all the credit, and don't even consider the possibility of heritable dispositions. Behavior genetic work tends to point to the possibility that in fact these heritable dispositions strongly effect life outcomes. Fathers matter, but for rather diverse reasons. Neither his sperm nor his magical presence explain it all.

And yet please remember that a huge fraction of the variation is not accounted for. It doesn't seem to be straightforwardly heritable, nor is it due to distinct home environment. Judith Rich Harris in The Nurture Assumption proposed that much of the "non-shared environment" was peer group. A simple illustration of the dynamic has to do with accents. Children usually speak with the accent of their peer cohort, not that of their parents. But the reality is that we still don't know what this non-shared environmental component of variance is. In  fact it could be gene-gene interactions, which won't get captured by measures of heritability. Or it could be developmental stochasticity. I bring these up to point out that even if less than half of the variance of the trait in the population is due to genes that does not entail that it is particularly amenable to reshaping via social policy. Secondarily, even highly heritable traits, such as height (~80% of the trait variation is due to genetic variation) exhibit only mild correlations when you look across siblings (r ~ 0.50 for height). So lesson two: children are going to vary, and you may not have much control over that variation.

Ultimately what my daughter has taught me as a father intellectually in regards to raising her is that I always have to update my assumptions and beliefs, and allow her to give me input into her own development. I don't subscribe to any major "school" of parenting, nor do I think there is a one-size-fits-all model which would be appropriate for the majority of children beyond the basics (i.e., feed your children adequately and prepare them for the expectations of society as a whole). But natural and social science does give me broad parameters, setting the horizons of the landscape. And yet the space of possible choices is still enormous. For me my daughter is a sort of personal tachyon, her existence is so absorbing that I have a hard time viscerally recalling when she did not exist. And I wouldn't have it any other way. But that's feeling, not analysis. And sometimes that is the point!