Marmoset fathers show distinct brain differences from those without offspring. 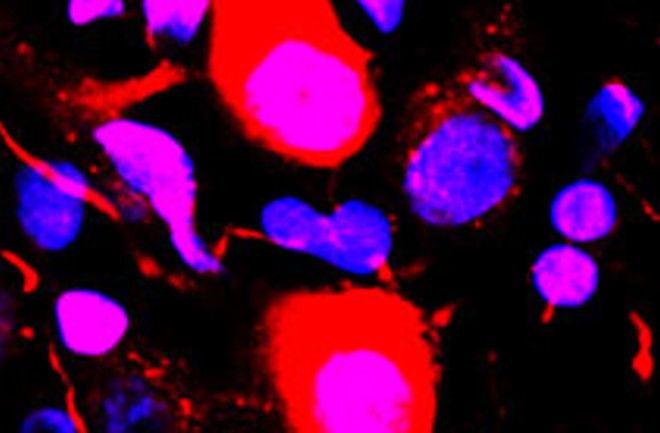 Neurons have increased receptors for a "cuddle hormone" (red areas) in the brains of marmoset fathers.

Among primates, devoted fathers tend to be the exception rather than the rule. Marmosets are one such exception.

During the first month of their infants' lives, males spend even more time carrying their little ones around than mothers do. "We thought that this is pretty much as close as it gets to human parenting," says Yevgenia Kozorovitskiy, who teamed up with fellow Princeton neuroscientist Elizabeth Gould to investigate how paternity affects brain activity in marmosets.

After comparing the brains of males with offspring with brains of childless males in mating pairs, Kozorovitskiy and Gould found that fathers not only had more connections between neurons in their prefrontal cortex, a region involved in anticipating consequences and attaining goals, but they also had more receptors for vasopressin, a neurohormone linked to social interaction and bonding. Among dads with older offspring, though, they found fewer additional receptors, suggesting the change may depend on recent contact with infants.

No one knows if the same changes occur in humans, but neuroimaging studies have already established that viewing images of their children activates parents' prefrontal cortex. "People often think about hormones causing changes in the body with respect to maternity or paternity," Kozorovitskiy says, "but these experiences can have a widespread impact on the brain as well."