A new study offers two reasons to be cautious about some of the claims made for the role of the hormone oxytocin in human behavior. The paper's

out now in PLoS ONE

from researchers James C. Christensen and colleagues, who are based at the US Air Force Research Laboratory in Ohio. That the military are interested in oxytocin at all is perhaps a testament to the huge amount of interest that this molecule has attracted in recent years. Oxytocin has been called the "hug hormone", and is said to be involved in such nice things as love and trust. But according to Christensen et al., quite a lot of previous oxytocin research may be flawed. Their paper is in two parts. Christensen et al. first show that the only accurate way to measure oxytocin levels in blood is by performing plasma extraction before chemical analysis. Using unextracted plasma, they find, leads to seriously distorted measures. The differences between extracted and unextracted plasma estimates of oxytocin have been noted before, but Christensen et al. show directly that unextracted plasma interferes with oxytocin measurement. They found that oxytocin test kits were unable to detect a 'spike' of pure oxytocin added to some unextracted plasma samples, whereas the spike was reliably detected when added to an extracted sample. This was true using either the ELISA or RIA method for quantification of oxytocin. With ELISA, unextracted oxytocin measures were also very noisy and unrealistically high: 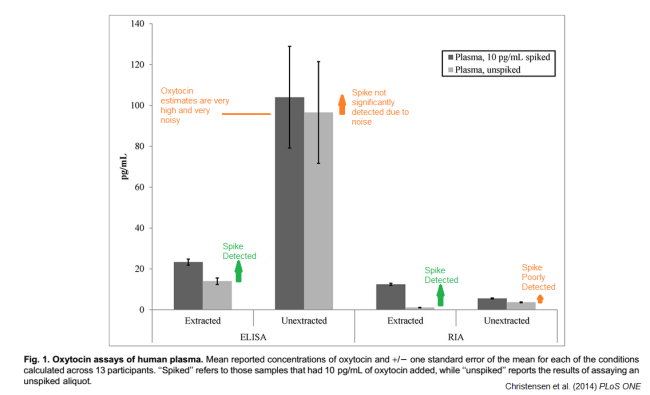 That's a worrying result, given that many previous studies have used unextracted plasma samples to estimate oxytocin, and many of these reported finding correlations with human behavior e.g. trust. How could such an unreliable technique give so many positive results? I asked Christensen: if, as your results suggest, unextracted plasma samples give oxytocin measures that are effectively just random noise, shouldn't those previous studies that used this method all have found no correlation between "oxytocin" and behavior? How could mere noise create so many false positives? He replied:

There are serious challenges for researchers working with highly variable data, particularly in an emerging area such as neurohormones during social interaction. There are many choices to be made for analyzing these data that can influence the eventual results, such as outlier handling and how to use baseline measurements. I'm not aware of standards in the community for these choices, as a result I think it's relatively easy for good scientists to focus on positive results and unintentionally report results that can't be replicated in a controlled study. As an example, Andy Field (in this post) reanalyzed data from the Kosfeld et al. (2005) paper inNature, and he shows that the primary result doesn't hold up well under alternative assumptions and analytic approaches. That paper is an oxytocin administration study, but the same challenges can arise in endogenous measurement studies. It's also possible that the concentrations obtained with the unextracted ELISA process are informative, just not specific to oxytocin concentrations. Just to speculate, the results could correlate with mild dehydration, which in turn could have some influence on social interaction. I am confident that ongoing improvement in methods and further improvement in understanding of complex hormone systems like oxytocin will help to solve this sort of puzzle.

There's more. In the second half of their study, Christensen et al. measured (extracted!) plasma oxytocin levels in people while they played the Prisoner's Dilemma game, a task which involves decisions to trust (or not) a partner. The hypothesis (based on previous work e.g.) was that oxytocin would predict people's tendency to trust or to distrust, and/or that trusting would itself raise oxytocin levels. So Christensen et al. took six blood samples from each volunteer, before, during and after the game. However, they found no significant correlations between oxytocin and behavior. The authors note that this result doesn't prove that oxytocin isn't involved in trust. It's possible that oxytocin is being released inside the brain, but not making it out into the blood in sufficient quantities to be detectable. However, if that is the case, it seems to me that it raises the question of whether there's any point in measuring blood oxytocin at all.