Out With One Sense, in With Another

The music of Stevie Wonder and Ray Charles supports the common belief that losing one sense can enhance another. Italian researchers have better evidence. They find that after only 90 minutes, blindfolded people can develop a keener sense of touch—a sign that the portion of the brain dedicated to vision can help process other senses. Although such neurological flexibility used to be considered a feature of a developing brain, “we know now that, even in adults, it is possible to find plastic interactions. If you change the input, you can recruit a part of the brain for a different function,” says Salvatore Aglioti, a neurologist at the University of Rome La Sapienza and the Santa Lucia Foundation. 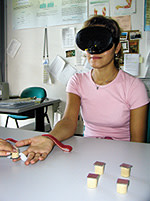 Aglioti and a colleague asked 28 test subjects to place their fingers on a series of plates marked with grooves of varying sizes, with the width of the grooves equal to the distance between them. Some of the grooves were so fine that the surface of the plate felt smooth. After being blindfolded, however, people were able to feel grooves that were more subtle than the smallest ones they could discern in a previous test. Repeating the test 130 minutes after the blindfolds were removed, the subjects’ sense of touch had reset to normal. “Forgetting is as important as learning,” Aglioti says. “If we don’t forget quickly, we don’t have room enough for other functions.”