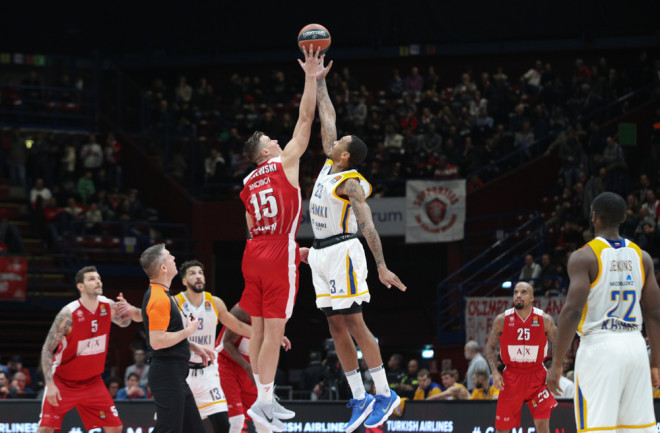 (Credit: Fabrizio Andrea Bertani/Shutterstock) It's one of the most common arguments in basketball: Who hit that ball out of bounds? When two NBA players lunge for a ball end up tipping it out, neither wants to cop to the final touch. Refs are called in to arbitrate while both players deny their culpability, often in heated tones. There's an obvious motive behind wanting to avoid blame, but a new study shows that there might also be a neurological basis behind both players' belief that their opponent touched the ball last. Our brains seem to engage in a bit of time travel when it comes to linking up our actions and their effects in the real world, researchers from Arizona State University say. When we reach for a ball — or draw our hands back to avoid hitting it out — our minds tell us that the action happens slightly earlier than it actually does, they say.

Inspired by those basketball arguments, Ty Tang and Michael McBeath decided to conduct a lab study that would test how participant's experience of touching something would line up with when the touch actually happened. Some previous evidence actually suggested that our minds might rewind the clock a bit when tying actions to reactions. For example, participants in studies where there's a delay between them taking an action and something happening seem to perceive that delay as shorter than it actually is. In this study, published Wednesday in Science Advances, the researchers had 16 undergraduates pair off with a partner, separated by a barrier. They were supposed to tap their partner's hand when they saw a light flash, and then indicate which person made the first touch. Sensors on the backs of their hands recorded who actually won the contest. They weren't very good at telling who won, the researchers found. When their touches happened simultaneously, the participants' said that they had actually made the first touch 67 percent of the time. They even put numbers to the effect: Participants thought their touches happened about 50 milliseconds earlier than they actually did on average. They repeated the experiment with a mechanical partner, and got about the same results. It's an indication that our minds tell us we've done something before it actually happens, giving us a version of reality that is just slightly ahead of everyone else's.

The behavioral quirk can likely be traced to the fact that our brains are constantly making predictions about things happening in the world around us, playing out events before they happen. The fast-forwarding accounts for the fact that our brains need some time (though it's measured in milliseconds) to process information from our senses and turn it into action. Our brains have to work ahead, in other words, by anticipating what will happen in order to react to it in real time. "The 50 millisecond time delay makes a lot of sense because we know the brain is always predicting our actions and perceptions" McBeath says in a statement. "When something is unexpected, there is a slight perceptual delay while the brain figures it out." So, our brains "see" our hand moving before it actually happens. The gap between perception and action is small, and it's not something we'd usually notice. But in situations where milliseconds matter, such as when lunging for a basketball, it might be enough to throw us off. The gap could even be more noticeable for athletes, the researchers say, who sometimes benefit from a heightened ability to mentally predict events in the real world. How that might change the gap between perceived and actual action hasn't yet been tested, though. So next time you feel like telling that player they're lying about that foul, remember — it might not be their fault.