On Dwarves, James Watson, and the Oddities of Cancer 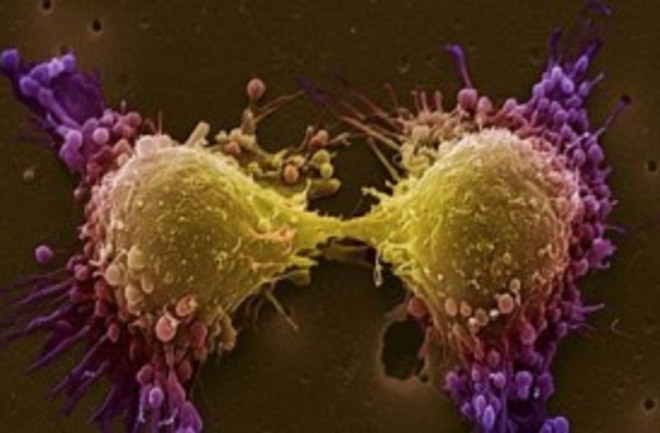 Dividing cells. courtesy Wikispaces We usually think of carcinogens as substances that mutate DNA, scrambling the program in a cell’s genome and converting it into a cancer cell. But not all carcinogens are mutagens. Others work in a more subtle way. Every time a cell divides it must copy its gigabits of genetic information and pass them along to its progeny. They, in turn, hand down the legacy to the next generation, and so on down the line. Like everything in life, it is an imperfect process and along the way mutations, most of them harmless, are inevitably occurring. Anything that stimulates a cell to divide at a faster rate will increase the number of these random errors -- and that raises the odds of hitting on a combination that can drive a cell malignant. One reason alcohol is carcinogenic is that with each swallow it kills legions of cells that line the esophagus. Other cells must divide to replace them, and with each duplication there is a slight chance of a cancerous mutation. Drink after drink, the odds add up. It is not only foreign substances that can fuel this cellular overdrive. The body's own estrogen has a similar effect. One of its natural roles is to stimulate cellular division in the breasts and uterus. This happens with every menstrual cycle, incrementally increasing the risk of cancer. Rapidly dividing cells are more prone to mutations -- that might also explain why osteosarcoma, a cancer of the bone, is more likely to occur in adolescents. Their bodies are undergoing hormone-induced spurts of growth. In fact, tallness itself appears to be a risk factor. An epidemiological project called the Million Women Study found that every four inches over five feet of height increased cancer risk by 16 percent. The phenomenon has also been observed in men. The opposite effect appears to occur in a type of dwarfism called Laron Syndrome, which Gary Taubes writes about in the current issue of Discover. Because of an inherited genetic defect, the cells of people with this disorder do not respond to growth hormones. The adults are typically about three and a half feet tall, and they are virtually free of cancer. The Laron dwarves also appear to be all but immune to diabetes, which is particularly surprising because they tend to be obese. Obesity is a risk factor for both diabetes and cancer. All three phenomena are connected through a maze of biochemical plumbing involving insulin, estrogen, insulin-like growth factor -- what I refer to in my book, The Cancer Chronicles, as "the metabolic mess." It is one more layer of complexity to penetrate as scientists try to understand why we get cancer. Taubes's article mentions experiments with anti-cancer drugs, inspired by the Laron dwarves, that block hormone receptors, reining in cell division. In a recent talk at the Salk Institute, James Watson (who managed, as usual, to incite some audience members with his typically antagonistic comments) spoke enthusiastically of a drug called metformin, which is often used to treat diabetes by suppressing glucose production in the liver. It also appears to slow down proliferating cells, and Watson tried it himself as an experimental treatment for prostate cancer. "Metformin seems to me our only real clue into the business (of fighting cancer)," he said. "It seems to kill the nastiest cells, not the un-nasty. We don't know how it works, exactly." Obviously that is an exaggeration. Though Watson played a leading role in deciphering the double helix, people have learned not to give much credence to his pronouncements on imminent cancer cures. His early enthusiasm for Judah Folkman's drugs that inhibited angiogenesis (the process tumors use to generate their own blood vessels) turned out to be vastly overblown. (At the time Watson complained that he had been misquoted by a New York Times reporter, but he went on to speak with the same unrestrained enthusiasm about the research in a letter to the editor.) It is natural to hope that a cure for cancer simply awaits the finding of some amazing new treatment. Time magazine fed the illusion with a blaring headline on its cover last week. Inside the issue was a good article about cancer research, but I almost didn't read it because of the irresponsible way it was presented. There are reasons why the war on cancer has turned into thousands of small, drawn-out guerrilla actions. There will be "no exalted individual, no victory celebration, no Marie Curie or Jonas Salk, " Bill Saporito wrote in Time. And no James Watson. "Cancer doesn’t work that way." For new readers: The inaugural post to Fire in the Mind, Lighting the Match.