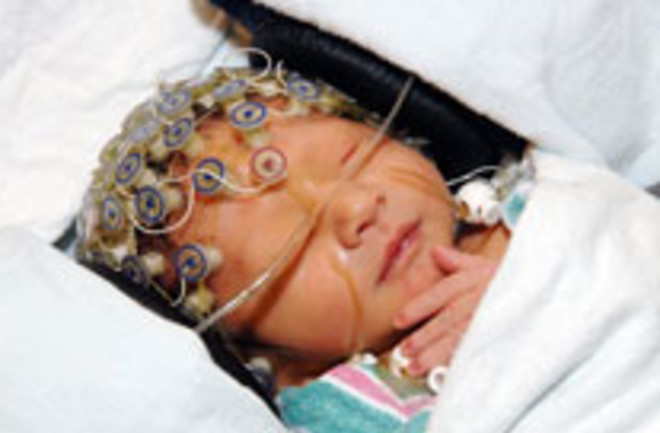 Don't be deceived by the peaceful look of a newborn baby asleep in a crib--that little tyke may actually be hard at work, soaking up information about the world. A new study has found that newborns are capable of a rudimentary form of learning while they're asleep, which may be an important process, considering that infants spend between 16 to 18 hours a day in the land of Nod. Researchers recruited one- and two-day-old infants for the study, published in the Proceedings of the National Academy of Sciences. With each sleeping baby, the researchers played a musical tone and followed that by a puff of air to the eyes, a mild annoyance that caused the infant to automatically scrunch up its eyes. As this sequence of events was repeated, the sleeping babies learned to associate the air puff with the tone, and soon began to to tighten their eyelids as soon as they heard the musical note, even if the air puff didn't follow. Electrodes stuck to their scalps also showed activity in the prefrontal cortex, which is involved in memory.

"It's surprising how quickly they learned — the study took 30 minutes, but I think they actually learned this in half that time," said researcher William Fifer, a developmental neuroscientist at Columbia University in New York. "We knew that a baby's job is to be an information gatherer, a data sponge, but I don't think we realized this also happens when they're sound asleep." [LiveScience]

This research is reminiscent of another experiment done by a different set of researchers last year, which found that some coma patients are capable of the same learned response

(associating a tone with a puff of air to the eye). Neuroscientist Tristan Bekinschtein, who conducted the study on coma patients, says the work on infants suggests that there may be more gradations of consciousness than we understand.

Unlike adults, who are unconscious when they sleep, he suggests that sleeping babies may be in a semi-conscious state, allowing them to learn. "We do not know much about sleep in babies but it does not look like sleep in adults," he says [New Scientist].

80beats: Even Newborn Infants Can Feel the Beat