Need to Commit Something to Memory? Sleep On It 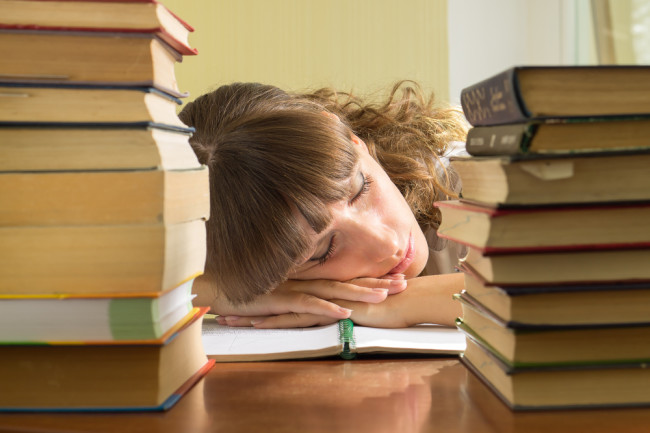 Remember staying up all night cramming for that statistics test in college? Turns out you probably would have scored higher if you had closed the books and hit the hay. A series of recent studies, some of which were presented at this week's annual meeting of the Cognitive Neuroscience Society, suggest that a good night's sleep doesn't just make you feel more rested – it's also crucial for remembering everything from test answers to when to mail your mother's birthday card.

The idea that sleep is key for retaining memories itself took a long nap. Researchers first explored the connection between sleep and memory back in 1924: scientists at Cornell University found that subjects who were allowed to sleep through the night were better able to recall things they had learned the night before compared to subjects who did not sleep. Three years later, an inventor named Alois Saliger, convinced that the unconscious mind was more sensitive to suggestion, devised the "PsychoPhone," a device that could record a message and then play it back automatically while you slept. (Aldous Huxley even wrote about the device in 1932.) Two decades later, in the 1940s, researchers declared they had found a "cure" for adolescent fingernail-biting by playing "don't bite" messages while test subjects slept. There was just one problem: What if they hadn't really been asleep after all? At the time, there was no way to measure brain activity to make sure. Other researchers debunked the nail-biter findings in 1956. By 2009, the whole idea of enhancing memory through sleep was dismissed in the scientific community. During sleep, sensory signals shut down, critics said, so how could messages played during sleep even register in the brain?

In the past few years, however, a number of studies have shown that those early sleep researchers were on to something after all: Not only does adequate sleep aid memory, cues received during sleep can also help us to remember things. In one study conducted by Ken Paller's lab at Northwestern University, subjects were asked to move various images – of a cat, a teapot and other objects – to different locations on a screen. While they were moving the images, they also heard the sound the object makes – for example, in moving the picture of the cat, they heard a "meow." During sleep, they were exposed to the sounds of some of the objects again (at a low volume, of course), and the next day, they were asked to remember the locations of the objects. The subjects were better able to recall the locations of the objects cued during sleep. "Sleep reactivation may help determine which memories endure," Paller told conference attendees.

Susanne Deikelmann of the University of Tubingen in Germany had a different question: Can trying to remember something indeed make it more memorable? To find out, Deikelmann and her fellow researchers asked subjects to learn word pairings. Half were told that they'd have to remember the material later. Then the subjects either got two full nights of sleep or were kept awake one night and allowed to sleep the other. The subjects who slept both nights performed better on the recall test overall. But the best performers were the ones who were both aware of the upcoming test and were allowed to sleep both nights. "There's a clear effect of expectancy on the memory," Deikelmann said. We can keep those intentions in mind in two different ways, she said. We can either remind ourselves constantly or store it in our memory and retrieve it later when we encounter a trigger.

Almost a century after scientists first began studying sleep, it's clear that getting some z's is useful for far more than resting our bodies; it's also necessary for retaining short- and long-term memories. These new findings could have important implications for everything from education to overcoming phobias, Deikelmann said. But when it comes to studying for that final, sleep can only go so far. "It's preposterous to think you can just learn everything in your sleep and not study," Paller said. "Sleep is not a substitute for daytime learning."