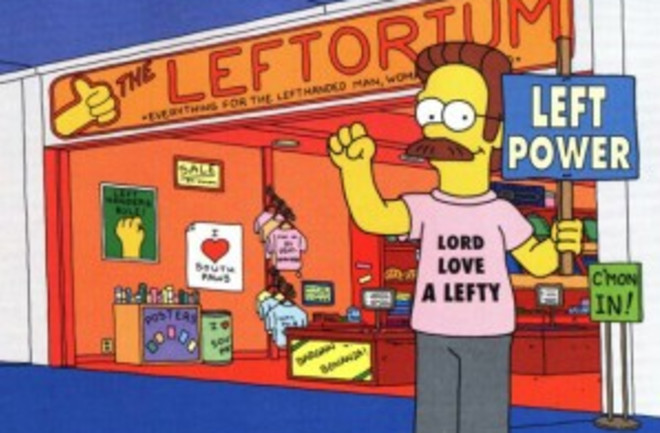 If you're ever engineering a nuclear power plant with a lefty, beware: apparently, the same features of their brain that make them left-handed might also make them avoid using exact numbers.  Even more surprising, just having a left-handed relative makes people more prone to rounding. Maybe this is why the Romans didn't trust them, and "sinister" comes from the Latin word for "on the left side."

"We report data from an internet questionnaire of sixty number trivia. Participants were asked for the number of cups in their house, the number of cities they know and 58 other quantities. We compare the answers of familial sinistrals – individuals who are left-handed themselves or have a left-handed close blood-relative – with those of pure familial dextrals – right-handed individuals who reported only having right-handed close blood-relatives. We show that familial sinistrals use rounder numbers than pure familial dextrals in the survey responses. Round numbers in the decimal system are those that are multiples of powers of 10 or of half or a quarter of a power of 10. Roundness is a gradient concept, e.g. 100 is rounder than 50 or 200. We show that very round number like 100 and 1000 are used with 25% greater likelihood by familial sinistrals than by pure familial dextrals, while pure familial dextrals are more likely to use less round numbers such as 25, 60, and 200. We then use Sigurd’s (1988, Language in Society) index of the roundness of a number and report that familial sinistrals’ responses are significantly rounder on average than those of pure familial dextrals. To explain the difference, we propose that the cognitive effort of using exact numbers is greater for the familial sinistral group because their language and number systems tend to be more distributed over both hemispheres of the brain. Our data support the view that exact and approximate quantities are processed by two separate cognitive systems. Specifically, our behavioral data corroborates the view that the evolutionarily older, approximate number system is present in both hemispheres of the brain, while the exact number system tends to be localized in only one hemisphere."