My Argument With Noam Chomsky 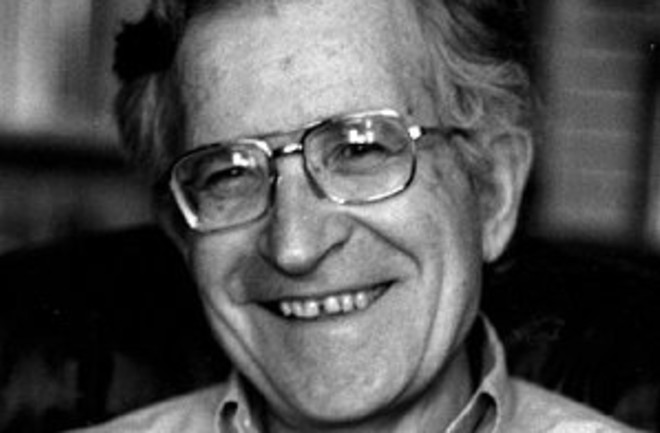 The Knight Program at MIT has a magnificent twice-weekly seminar series, and last week we had our biggest star yet: MIT linguist Noam Chomsky. It was great to hear from the great man in such an intimate setting--particularly about his pioneering work on understanding the origins and nature of language.

But at the same time, we also heard from Chomsky on politics--and this forced me to reflect (as I haven't in some time) on just how far I am from being able to accept his radical, anti-corporate, anti-establishment positions. I do see a modicum of truth to all of them. But again and again, they're taken so far that Chomsky loses me along the way.

At the outset, let me explain my basic politics. I've always been a liberal, but never a radical. I've written at various times for The New Republic, The American Prospect, and The Nation, spanning the spectrum of the mainline political left magazines--and I've also occasionally crossed over and written for Reason. Throughout, I've felt that I can have a valuable dialogue with readers of all of these magazines, and that all of them have serious things to say.

Especially with the New Republic crowd, but also in liberalism generally, there has been a distaste for the Chomskyite view, which runs something like this: wealthy, powerful interests systematically conspire to keep us down and themselves up. They trick us through the brainwashing of public relations and advertising into wanting their products. They financially enslave us through college loans and credit cards and an inequitable healthcare system and unfair tax structures. And they sell us unethical wars--again through what are fundamentally marketing campaigns--that only serve to preserve existing power structures.

In this view, as I understand it, there is really no major difference between Democrats and Republicans. Both parties are similarly licking the feet of the real folks in power, the rich and the corporate. In our seminar, Chomsky even criticized Obama's historic election, writing it off as the greatest of marketing campaigns, and so likening it to corporate brainwashing triumphs like getting us to smoke cigarettes or want Macs.

With Chomsky's position, there is always a grain of truth. But there is also, I feel, a lack of nuance.

First off, let's talk about marketing. There is no doubt that it works, because human beings aren't fundamentally rational, or at least not all the time. Appeals to the emotions, to desires for comfort and security and, yes, sex, really get to us. It doesn't take a genius to figure this out, and so advertising companies have increasingly perfected the art of getting us to want things we don't need. So far, so good.

But my problem with the Chomskyite view is that I find it strangely unrealistic when confronted with these realities. The idea seems to be that we ought to liberate ourselves from all the brainwashing and cram it all back down the PR agencies' craws. But this just isn't going to happen. Once again, people aren't rational, they don't have time to fully research every choice they make in their lives, or to critically examine every mass media message they hear, and this isn't going to change. We'll always be susceptible to advertising. The answer, then, is to do precisely what Obama did--convey the need for real policy solutions by tying that need, emotionally, to a message of hope, change, and a better future.

I don't see what is wrong with this. In fact, I see a vast amount that is right with this.

Or take the topic of financial inequity and debt enslavement--something which does indeed happen to our best and brightest and most idealistic young  people. You finish college, you want to change the world, and so you take a public interest oriented job. And then reality strikes. You aren't making enough money. You can barely support a family. Before long, you start wishing you had gone to law school and gotten a corporate job where the Christmas bonuses are much bigger than your current salary.

Once again, this situation sucks--but in response to this problem of material wants, it is my experience that the radical left preaches an unrealistic, ascetic, self-denying approach that will never work for most people. To some extent, the public interest jobs are poorly paid because there just isn't enough money; but to some extent, the left actually likes it that way. It is seen as a mark of virtue to live on almost nothing, working for a PIRG right out of college, courtesy of Ralph Nader. But it is ridiculous to expect that our best minds and greatest talents will consent to carry on in this way throughout their lives like good soldiers, driven by ardor for a cause and continually ready to dutifully clash with the corporate lobbyists who earn three to five to ten times more money annually.

I have repeatedly observed, for instance, that one highly revealing aspect of the Marc Morano problem is his comfortable salary. On our side of the climate debate, philanthropists and universities do not create counter-Moranos who can match him not only in the battlefield of ideas, but in the competition  to earn a good livelihood. And it isn't merely that we don't have as much money on our side of the fence as the corporations do. That may be true, but the fact remains that there is tons of money in foundations and universities, which sport multi-billion dollar endowments or government and state funding. The problem is, we rarely spend that money in the way that one would do if one actually wanted to win in the battle of ideas. The corporate folks play to win, and that's why they usually do. The idealists and intellectuals divide their forces, bicker, play to lose, and then exult in the virtue of their cause and the rightness of their ideas even as they fail to make them successful or a reality.

Or at least, such is my experience.

Finally--and last but not least--let's talk about the "Washington establishment." I've been there. I've been a journalist in DC, and I watched how the mainstream left and right alike fell for the Iraq war. I am ashamed to say that I was initially one of those dupes, unfortunately believing along with everyone else the "WMD" lie--although I later I sought to make up for it with it this 2004 Columbia Journalism Review article (unfortunately no longer online) which took to task the editorial pages of our five biggest newspapers for too often beating a drum towards war.

The point is that there is something very powerful, and very insidious, about how the "mainstream" can coalesce around a consensus that is wrong and that trivializes real Chomsky-style dissent until it is too late--especially when everybody is living in an atmosphere of fear (which we were after 9/11, the anthrax attacks, and so on).

So Chomsky is very much on to something here. But again, what is the solution? To duck out the the game and point fingers from the radical margin? Or to figure out a better way to get more voices heard--a strategy that, once again, is going to require some serious ideas marketing?

Once again, I choose the latter.

I'm really glad we have Noam Chomsky. In a genial way, he states a very strong and uncompromising position that everybody should grapple with and that, again, contains at least a partial truth. But where he doesn't win the argument, in my view, is when he attacks the system outright, rather than showing us how to work successfully within it for change.

We are not going to junk our entire politics or our entire market system. And we are not going to turn people into fully rational creatures who see how advertisers manipulate them and how moneyed interests enslave them, and who are willing to forsake the need for a life of comfort and well-being out of idealism and devotion to a cause. We need to treat people as people, understand their foibles, and then get as much political progress out of them as we possibly can. And in this endeavor, I believe that the Obama way, rather than the Chomsky way, holds the greatest promise for improving our country and our world.