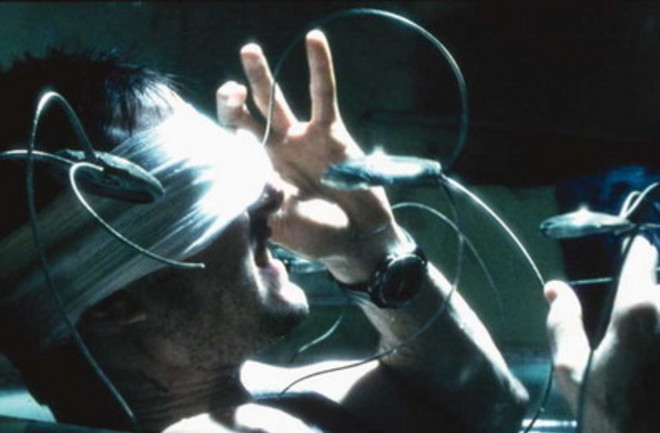 WBEZ, the Chicago affiliate of National Public Radio, recently gathered together several of my fellow science and engineering researchers at Northwestern University to talk about the science of science fiction films. The panel, and just short of 500 people from the community and university, watched clips from Star Wars, Gattaca, Minority Report, Eternal Sunshine of the Spotless Mind, and The Matrix. I was the robot/AI guy commenting on the robot spiders of Minority Report; Todd Kuiken, a designer of neuroprosthetic limbs, commented on Luke getting a new arm in Star Wars: The Empire Strikes Back; Tom Meade, a developer of medical biosensors and new medical imaging techniques, commented on Gattaca; and Catherine Wooley, who studies memory, commented on Eternal Sunshine. The full audio of the event can be streamed or downloaded from here. We all pitched in to comment on the clip featuring Keanu Reeves learning kung fu through an apparently painful download in The Matrix. The panel consensus: if something like a neuroprosthetic arm for everyone is in the near future, downloading skills a la The Matrix is at the far end of the far future. Reasoning: there are hundreds of thousands of sensory and movement neural channels being activated while learning of kung fu (not even counting vision, which has a million channels per eye). To train the brain via download, we'd either need to excite those channels in just the same way artificially -- at roughly normal speed -- or figure out how to directly modify the many millions to billions of neurons in the brain that are changed while learning kung fu. Either option presents technical challenges we are far from overcoming. I picked the Minority Report clip, which featured robotic spiders artfully killing any last doubts you might have had of having privacy in the future. In this clip, some police come to an apartment complex that they are searching for a person in, and release a platoon of nimble robot spiders. These spiders spread out and crawl up people to scan their retinas to identify each person in the building. They sense in the infrared (which is why Tom Cruise hides in a tub of cold water) to detect the warmth of live bodies to be scanned. One of the brilliant aspects of the way it's shot, as a pan over top the exposed rooms of a floor of the building, is how it shows just how "normalized" the loss of privacy has become in the future, with one couple in the midst of a fight hardly pausing their exchange of blows to let the scan happen before starting to whale at each other again. It's as natural as selling a row of pumpkins on FarmVille and losing your privacy through Facebook application data misuse. There's a few things I love about this segment of the film. The first is that, like most good sci-fi, it simultaneously makes you say "oh wow that's cool," while terrifying the crap out of you that this may be the endpoint of all the privacy failures we are being subjected to. Sci-fi as incubator of dreams and place to work out our anxieties about technology. On a professional level, I also liked how center stage was not a humanoid robot for once, but rather a non-human biologically-inspired robot. I appreciate that story-tellers need robots that people can relate to, but the disconnect between what actually goes on in robotics (where humanoid robotics is a tiny fraction of research effort) and what's always in the movies is sometimes jarring. Not only did Minority Report show a biologically-inspired robot, it showed them in exactly the context in which they make a lot of sense: solving problems that conventional machines and robots don't do well, such as high agility motion that needs large amounts of sensory intelligence. Animals are fantastically agile. But agility requires a lot of flexibility in the way a body can move, and with that flexibility comes the great challenge of how to control all that movement for stable motion, and how to acquire enough sensory information to guide the body in a highly nimble way. It's a fantastically complicated problem, and understanding how it works is precisely what motivates some of us who do research in this area. I also liked how the makers of the movie went to the trouble to seek out a colleague who studies jumping spiders, Damian Elias at UC Berkeley, to get good sound of the spiders scampering around. It's interesting, as Sean Carroll noted for a similar panel he was part of at Comic Con, how much demand there is for this kind of discussion. With the blogosphere and traditional media saturation of science and tech news, maybe this all portends the dawning of a new age of sci-fi for viewers who will be a lot more sophisticated in the kinds of stories that will get them intrigued.