Last year, psychologists B. Keith Payne and colleagues breathed new life into the debate over 'social priming' with a paper called Replicable effects of primes on human behavior. Behavioral or social priming - the idea that subtle cues can exert large, unconscious influences on our behaviour - was a major topic of research for many years, but it's since been largely discredited. The field’s reputation suffered when Diederik Stapel, a leader in the field, was exposed as a fraud. Many researchers have since failed to replicatewell-known social priming effects. So it surprised many when Payne et al. claimed to have a found a genuine, replicable example of behavior priming. They showed that flashing up words like "bet" and "gamble" made people more likely to bet in a computerized gambling task. 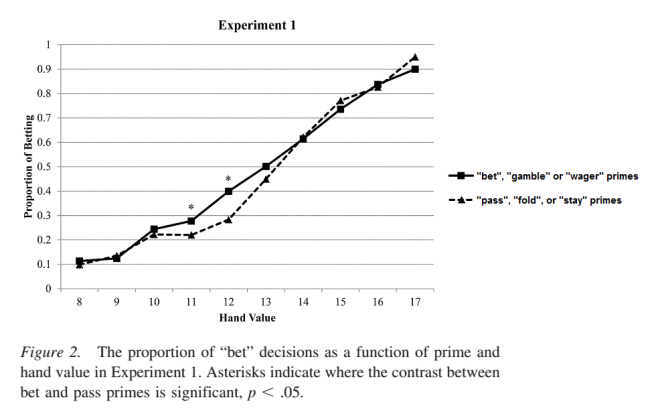 In my post about the paper, I praised Payne et al.'s work, but I questioned whether the gambling task was really comparable to the kind of 'social priming' as practiced by Staple and others. Payne et al.'s claims just seemed more believable than, say, “professor priming” in which volunteers asked to describe a typical professor supposedly did better on a quiz later. Now, prominent psychologist David Shanks offers his thoughts on the Payne et al. paper: Misunderstanding the Behavior Priming Controversy. Like me, Shanks doesn't think Payne et al.'s priming can be compared to the controversial kind of priming studies. For one thing, there's the difference in timescale: Payne et al.'s priming effect took place over a fraction of a second, but many social priming claims involve minutes or hours. Shanks also says that many social priming effects just seem psychologically implausible:

To activate the stereotype ‘professor’ and observe a downstream effect on an individual’s ability to answer the question “What is the total number of spots on a die?” would require a rich pathway of interconnecting concepts and processes which is orders of magnitude beyond what is typically revealed in more conventional (e.g., repetition) priming experiments, where priming is commonly found to transfer remarkably narrowly across tasks and time.

Shanks questions other aspects of Payne et al.'s argument, in particular the idea that the priming effect operated unconsciously. The idea that primes can influence us without our being aware of it is central to many theories that seek to explain social priming. Shanks is a well-known critic of "unconscious processing" claims. He concludes that

Perhaps the mind is not an iceberg much of whose modular structure is below the waterline of awareness, and perhaps the unconscious can not in reality perform all of the high-level functions that the conscious mind can.