US military tech hothouse DARPA have an exciting announcement:

In what is - to my knowledge - the first example of the direct militarization of neuroscience, DARPA have developed a system in which electrical responses in a human brain are an integral step. A soldier watches a screen on which, via various cameras, possible battlefield "threats" are shown. The cameras are fancy, and fancy image-recognition algorithms prioritize images that resemble threats - stuff that looks a bit like a tank, an IEDs, etc. But that's just the set-up.

The neuroscience core is that rather than just having a guy watching this screen and pressing a button if he spots something, they have a guy wired up with EEG to record brain activity. The system registers a threat when a picture causes a P300 response. Now, the P300 is an electrical wave triggered by stimuli that are somehow 'meaningful' to the individual person. If you ask someone to press a button whenever they see a red light, for example, and then show them various lights, red ones will elicit a P300. Very clever. But it may be too clever for its own good. We already have a system that can detect the P300. It's the brain. No, most of us don't think of it as in those terms - we think of it as "Oh!" or "WTF?" or "Button press time" - but that response is the P300 (or rather something that precedes it because the P300 takes 300 milliseconds to peak, but you can respond faster than that.) So why the EEG? You could program a computer to detect P300s in a guy's brain and set off an alarm. DARPA apparently have. But it would be easier and cheaper to just 'program' the guy's brain to detect the P300 and push an alarm button - by asking him to do that. The human brain is a supercomputer that's been in development for hundreds of millions of years and it's primary job is to detect threats and act on them as quickly as possibly. One day technology might be able to do better but I don't think we're there yet. DARPA say:

In testing of the full CT2WS kit, the sensor and cognitive algorithms returned 810 false alarms per hour. When a human wearing the EEG cap was introduced, the number of false alarms dropped to only five per hour, out of a total of 2,304 target events per hour, and a 91% percent successful target recognition rate.

All that tells us is that having a human check the pics via EEG is better than having no human involved at all. That's fine, but would a human just checking the pics via a button, be even better? We're not told. Maybe DARPA ran those tests and it really does offer advantages, but off the top of my head I can't think of any, and it wouldn't be the first time that the allure of high-tech neuroscience has blinded smart people to the fact that there's an easier, less sexy solution. Unless... OK. This is going to make me sound like a conspiracy nut. But there's one scenario in which the P300 has a decided advantage: unlike a button press, it's involuntary. It would work even if the guy doesn't want to co-operate. So suppose you've captured a terrorist and you want to know who his terrorist friends are or where they've put the bomb. But he's not talking and Samuel L Jackson is off sick. So you wire him up to this system and show him a bunch of pictures of all the possible suspects or targets on your database. His brain will respond with a P300 to the ones he recognizes. That would probably work - sometimes - and the P300 is already being trialled in some legal contexts for just that purpose although it's not clear how reliable it is. So it's just possible that this whole soldier-scanning-the-battlefield story is merely an elaborate front (and perhaps a useful source of crucial calibration data) for a device to allow the CIA to read minds. I warned you it would make me sound crazy. Quick! Pass the tinfoil hat...! 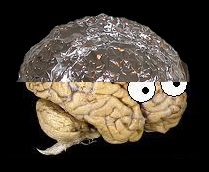