The finding that men are more likely to be secular than women is a relatively robust result. You can note this in the Pew Religious Survey, to the point where 70% of self-identified atheists in the United States are male. In places as disparate as East Asia and Latin America women are stereotypically more religiously identified as well (or, religious practice is categorized as a female-identified activity). So what about the patterns within denominations? Men, being more secular in orientation on average, would probably sort into the more liberal and less demanding denominations, right? Not really. See below the fold.

Breaking down more directly within each denominational family the evangelical-mainline dichotomy confirms the observation. Males are more numerous within evangelical &amp; fundamentalist churches, while women are more well represented within the mainline churches. I can think of many reasons to explain this, but I'll open up the field to comments....Note: I don't know if the Pew data are representative of the population numbers, but 47% of evangelical Protestants in this survey are male (in non-black denominations), vs. 43% male for mainline....Update: I think I did some calculations wrong for the aggregates. The general question holds though, why aren't men in more liberal denominations which are more "lax" when they are are skewed more secular? 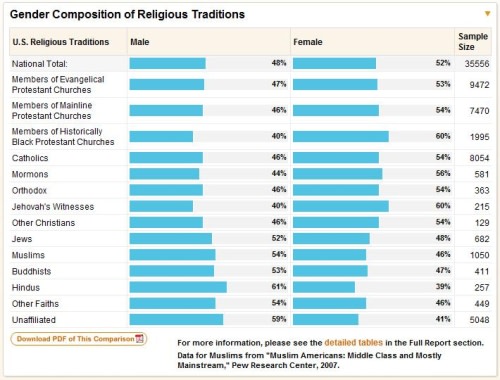