New efforts to trace the neural "connectome" - all the nodes and pathways in the brain - produce vivid images of the maps in our minds. 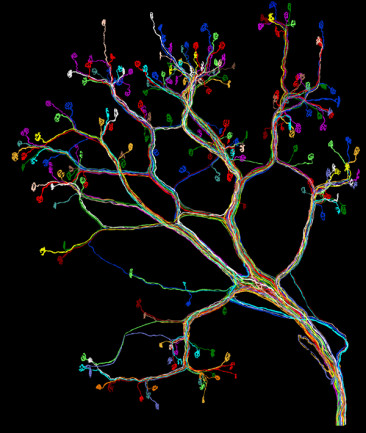 The human brain is a crowded place. It contains an estimated 100 billion neurons, connected to one another by a million billion synapses. Neuroscientist Olaf Sporns of Indiana University, cellular biologist Jeff Lichtman of Harvard, and computational neuroscientist Sebastian Seung of MIT are mapping these connections, aiming to eventually create a "connectome" of an entire brain.

Each neuron can be thought of as a cellular decision maker: It receives a multitude of signals and decides which ones to pass on and which to shrug off. Figuring out the interactions of all these decision makers would move researchers closer to creating models of how we perceive our surroundings and store memories. "One of the biggest hypotheses in neuroscience is the idea that memories are stored in the connections between neurons," Seung says. With a connectome, individual memories might be read from neural connections.

To tackle such a vast challenge, Sporns traces the major pathways that bridge different regions of the human cortex. Working with mice, Lichtman and Seung image one neuron at a time. So far, only the lowly nematode has had its nervous system completely mapped, and it has a mere 300 neurons--a neurological hamlet compared with the massive megalopolis of the human brain.

How To Wire An Ear

To trace individual neurons, Jeff Lichtman of Harvard uses engineered mice whose DNA includes jellyfish genes so that the cells contain fluorescent proteins. Under blue light, the neurons glow green, and computer software assigns each of the 200 green neurons a different color. The "tree" of neurons at right carries signals that control a muscle connecting the skull to the ear. Individual muscle fibers appear as bundles at the tips. Comparing how this simple neural pathway changes between baby and adult mice sheds light on how brains rewire over time, Lichtman says. 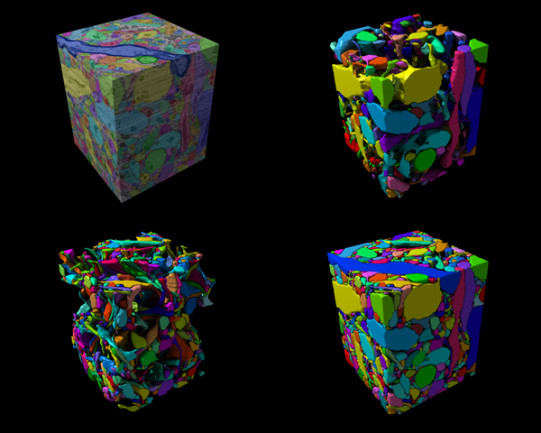 To create these cubes, Sebastian Seung of MIT and Daniel Berger, a postdoc in his lab, shaved 256 microscopically thin slices off the outermost layer of a mouse brain. Each slice was imaged under an electron microscope; the digital pictures were then stacked to construct a 3-D representation of the sliced region (top left). In reality the cube is only six-thousandths of a millimeter wide. Each cell in the image (both neurons and the support cells known as glia) was color-coded by hand, a process that took 150 hours.

To visualize the elements that make up neurons--axons, dendrites, and cell bodies--Seung and Berger used a computer to draw 3-D surfaces around the neural structures found in the cube. The bottom-right image depicts the outlines of neurons only, with glial cells removed; the bottom--left cube visualizes all the axons, the parts of neurons that transmit signals. The top--right cube shows only dendrites, the signal-receiving portions of neurons. Together the images give a sense of how the nervous system allocates space among glial cells, axons, and dendrites. 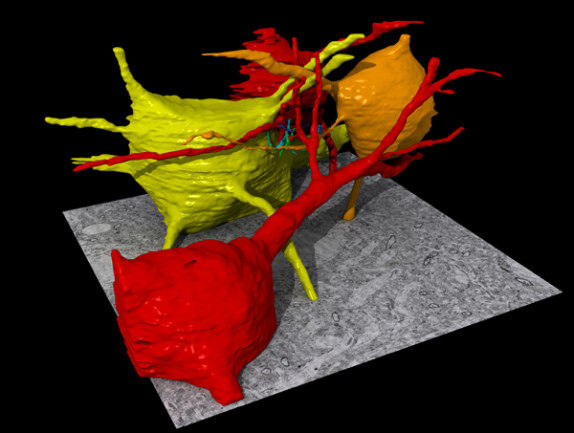 Here, three mouse neurons are each tinted a different color, so that the surfaces of their cell bodies, dendrites, and axons are visible. The gray "base" is the raw electron microscope image. Eventually, Seung hopes to train systems of computers, using artificial intelligence, to create images like this one automatically, speeding the tedious process of mapping a connectome. Adding to the challenge, Seung says, is the fact that an individual's connectome changes over time as neurons grow new branches and prune old ones in response to experiences. 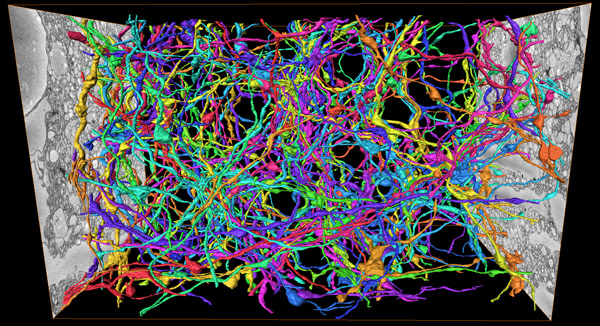 Viren Jain, a postdoc in Seung's MIT lab, with the help of researchers at the Max Planck Institute for Medical Research in Heidelberg, Germany, mapped the neurons in a rabbit's retina. Each color represents a distinct neuron. The neurons were traced from a large set of monochrome pictures of the rabbit's retina taken with an electron microscope, such as the black-and-white images on either side of the neural tangle. 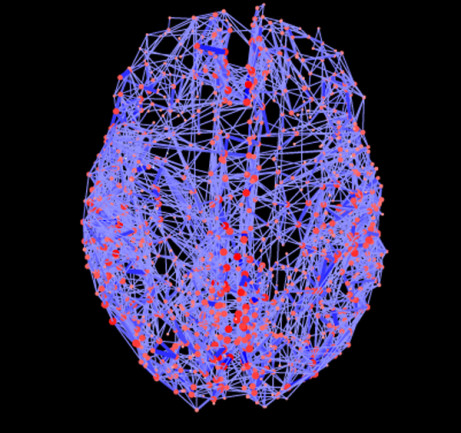 Olaf Sporns of Indiana University maps the major pathways that link regions of the human brain. He uses a technique called diffusion spectrum imaging, which traces neural connections by following water molecules as they diffuse along axons. The 5,000 blue lines in this image represent bundles of axons, and the 1,000 red dots are synapses where axons meet. Sporns argues that despite the evident tangle of pathways, the brain could be a lot more complicated. "Only a small percentage of the connections that can exist in the brain do exist," he says.