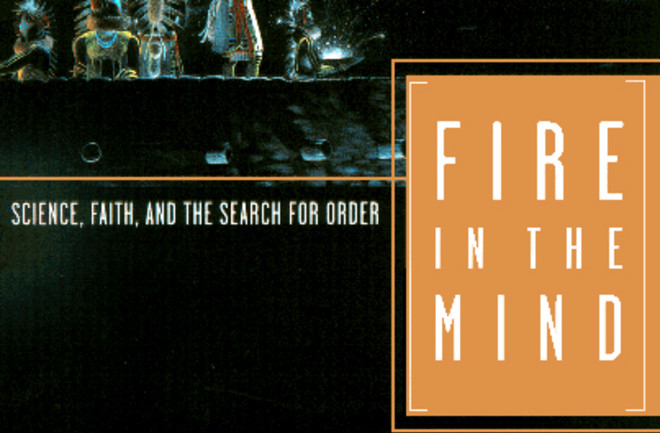 Jacket painting: "Putting Up the Stars" by Clifford Brycelea. All rights reserved. Jacket design by Calvin Chu, courtesy Alfred A. Knopf. From the north windows of my office in an old house in Santa Fe, New Mexico, I can look across the mesas to the hilltop where the Santa Fe Institute now stands. It began life in the 1980s in an old convent on Canyon Road (Murray Gell-Mann, godfather of the quark, occupied the office of the Mother Superior) and soon gained renown as a think tank devoted to the science of complexity. A complex system is one in which many little actors, each one simple as can be, interact with their neighbors and give rise to a rich new level of behavior. The actors -- agents is the usual term -- might be cells interacting in an organism or creatures in an ecosystem. They might be people bartering and selling and unwittingly generating the meteorological gyrations of the economy. The agents need not be living things. Put together hordes of molecules, each made from two hydrogen and one oxygen atom, and you get a mysterious quality called wetness. There is nothing about a single molecule of H2O that is wet. Wetness, in the lingo, is an emergent phenomenon. Are there principles that all complex systems have in common? I was living back east, working for The New York Times, when the Santa Fe Institute began pondering this question. Scientists like Stuart Kauffman were talking about a fourth law of thermodynamics -- one that would explain how order emerges in a universe governed in the long run by the inevitable slide toward entropy. Christopher Langton and Tom Ray were working with simulated creatures. The intellectual excitement is part of what brought me to Santa Fe. One afternoon at the city’s Sweeney Convention Center I attended an Artificial Life 4-H Show. More important, SFI was intent on bringing together experts from foreign fields -- getting physicists to sit in a room with economists or with wildlife ecologists or immunologists -- and see what new ideas might materialize. I knew I wanted to write about this, and the book that emerged from the interactions of my brain cells and the interaction of my journalistic persona with the scientists of Santa Fe was

is also the name I have chosen for this blog. The fire is the passion that drives us to find order in the world. Equipped by evolution with our neurological sieves, we sort the chaotic swirl of sensory impressions into patterns. The result can be a new scientific theory. But it can also be dogma, superstition, pseudoscience -- or simply a well intentioned theory that turns out to be wrong. The same biological circuitry that evolved to make sense of the world can also impose orders that aren’t really there. We often believe in them anyway. Here is how I put it in Fire in the Mind: “Just as nature abhors a vacuum, the mind abhors randomness. Automatically we see pictures in the stars above us; we hear voices in the white noise of a river, music in the wind. As naturally as beavers build dams and spiders spin webs, people draw maps, in the sky and in the sand.” Whether a subtle new pattern shows up in the data from an experiment on the Higgs boson, in an epidemiological report about a suspected cancer cluster, or in the results of a double-blind trial purporting to demonstrate ESP, it can be maddeningly difficult to distinguish between what we see and what we think we see. “We may be like fish up against the edge of the aquarium; the shapes and colors that dazzle us could simply be our own reflections distorted by the glass.” This theme -- more like an obsession -- runs beneath the surface of the books I’ve written, which range across subjects like artificial intelligence, quantum computing, particle physics, cosmology, the psychology of conspiracy theories, and the neuroscience of memory. It hovers in the background of the book I just finished writing, which will be published in August: The Cancer Chronicles: Unlocking Medicine’s Deepest Mystery. Now it will serve as the prime mover for this blog. In the coming days and months I will be posting my observations about developments in the world of science. I hope you will follow along and contribute to the discussion.